Famine, War and Love: a Novel 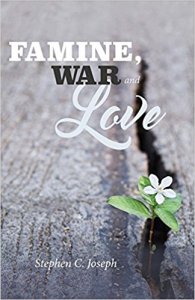 A reader of my blog recently published a novel and he has been kind enough to send me a signed copy!

The story makes the connection between the famines of Ireland in the nineteenth century, the Netherlands during the Hunger Winter of 1944-1945 under German occupation, and Ethiopia in the early 1980s,  thus bringing into view the universality of the effects of hunger, war and displacement.

The book is available in various forms on Amazon, and their summary is pretty extensive, so I’ll just copy it here in its entirety:

Christina Vermeer is a child of the Occupation of the Netherlands by the Nazis. When all food supplies are deliberately cut off to Northern Holland, in the Hunger Winter of 1944-5, and her father disappears, fleeing for his life, Christina and her mother are forced to survive on their own. Christina, 12 years old, becomes one of the courageous women ‘Going to the Farms’ to scavenge and steal food.

Jacob Riley, son of a penniless foundling Irish immigrant to America, becomes an American Army Air Force B-17 bomber pilot over Europe during WW2. He takes part in the food airlift of April/May, 1945, that saves the Dutch from further starvation. Jacob’s plane crashes; badly injured, and the sole survivor of his crew, he is rescued, and survives to return to Kansas and his parents.

Christina and her mother immigrate to Canada in 1950. Christina becomes an “All-Canadian girl”, marries, and has a daughter, Elsa, who grows up to be a pediatrician. Seeking adventure and fulfillment, she volunteers for a year’s service at a rural hospital in Ethiopia, during the peak of the famines.

Jacob Riley’s son, Jake (‘never call me Jacob’) Riley, born in Topeka, Kansas, is a foot-loose and fancy-free spirit who becomes a long-distance truck driver, always seeking ‘what is over the next hill.’ Deciding to work his way around the world, he finds himself, in 1982, as a long-distance driver hauling relief and medical supplies for Canada Child Survival, in northern Ethiopia.

And thereby hangs the tale…

2 responses to “Famine, War and Love: a Novel”