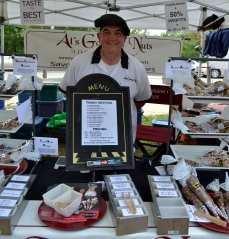 Vagabond Urges wrote in yesterday’s post, The Secret to Europe, about greetings in Paris shops. He observed that when a customer comes in, he or she greets the person behind the counter. Who then reciprocates and things go on from there. If you don’t start off with a greeting, you get the cold shoulder. As an American, he had to get used to that.

So I started thinking about different greetings. Yes, I remember that about France. It’s Bonjour madame, comment ca va? You wait for the response, and then what kind of bread you want.  In the Netherlands it’s the person behind the counter who initiates the greeting, which is usually limited to a good morning or good afternoon, without asking how someone is doing. Because that’s none of their business. It does make sense to me that the person who wants to sell you something initiates a greeting, but I realize that’s just cultural.

Vagabond Urges claims that Americans are more guarded toward strangers, but I suppose that depends on where you are in America. Here in Texas, the person on the business side of things always greets you and asks how you’re doing. Even on the phone. When I got a job as a school librarian in the first year I was in the States, I was taken aback, at first, by people I called about an order, or about some kind of technical support for the computers, who always wanted to ask how I was doing this fine morning before getting down to business. I had to learn to shift down and not say hi, my name, and then get straight to the point. I learned to say that I was doing fine (regardless of whether that was true, of course) and how were they? Then they’d ask how the weather was down there or something like that, and eventually they’d ask what they could do for me today.

Even the cashiers at the grocery store begin with a greeting and asking how I am. I always say that I’m good, and how are they? Most of the time they don’t hear that, because I guess it’s not expected that you reciprocate the question, but I feel strange not doing so. And when they do hear it, they seem to appreciate it. At the end of the transaction, the person on the business side usually says something like have a nice day, and you wish them the same. In the Netherlands that is not done. Except for weekends–you can have a nice weekend.