If I Were Queen… 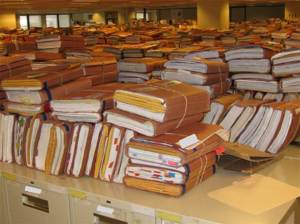 I regularly come across the writing prompt “If you were king…” I usually don’t know where to begin. Or I think of the painfully boring and restrictive life Queen Elizabeth of Britain leads, and then I lose my appetite for being queen. And in any case, America doesn’t have kings or queens.

But wait, America does have tsars!

Oh boy, if I could be tsar here in America, or tsarina in my case, I’d like to be the tsarina of information management for Veterans’ Affairs.

It was months ago that I saw a piece on TV about the Veterans’ Affairs’ Winston-Salem Regional Office in North Carolina. It was a follow-up on news about same back in 2012. I mainly remember seeing huge rooms full of files, and those files all representing veterans who are totally screwed.

The files were just dumped there. You might as well put a match to them for all the good they are doing. It infuriates me. That a country that puts so many of it’s young people in harm’s way doesn’t even have the decency to keep their records accessible is downright criminal, in my opinion.

Those images on TV were supposed to indicate how far behind Veterans’ Affairs is in dealing with paperwork. Paperwork. In the 21st century!

But we’re always underfunded, the bureaucrats at the department would no doubt say.

So here’s what I would do if I were tsarina:

Then I’d call the public relations people at Microsoft and Google and point out that this is something they could do for their country: donate their time and skills to come up with a program especially for Veterans’ Affairs, where all the relevant information could be entered and processed and presented in every possible way. That would include information necessary for planning, such as showing per state, county and on maps where the veterans are, broken down into age groups, health needs, etc.

Also, the veterans should have access to certain parts of their files, so they can go online and change their address or phone number themselves when they need to.

With all the programs Microsoft already has, a program that does everything Veterans’ Affairs needs shouldn’t take more than a couple of months to put together.

Microsoft and Google could also figure out between them how to set it all up so that data would be automatically transferred when a new version of the program comes out, so the system moves along with the times.

(It could very well be that such a program is already in place, in which case you can forget much of the above. And we’re moving on:)

Next I would call Dell and get them to provide several hundred computers and the networking between them and all that.

Meanwhile I’d also get Congress to agree on waiving a certain amount of any college graduate’s student loans for every month they volunteer to enter data at Veterans’ Affairs or working on the software and hardware and such at Microsoft, Google or Dell. Of course their meals and housing would be subsidized, but that would cost Veterans’ Affairs a lot less than they spend now on information employees who apparently don’t do their jobs.

I would also get Veterans’ Affairs, Microsoft, Google and Dell to accept veterans who want to work on this project.

But the files are spread out over VA offices all over the country, you say? Yeah, that might be part of the problem. I know that there are some pretty hardworking government employees out there, but I also know that many American government employees make a career out of pretending to be busy, and that’s even easier when they’re out in North Carolina or Nevada or wherever. So I would have all the paper files moved to one central location in, say, Washington D.C.

And the people who were supposed to take care of the files all along at Veterans’ Affairs offices throughout the country and weren’t? Well, they could redeem themselves by doing the data entry alongside the students and veterans, for the same minimal pay, until it was done. At the central location. If they didn’t feel like moving, they could quit.

I would also give the data entry folks quotas: x number of files entered per person per day. If this didn’t happen, they’d better have a very good reason, otherwise they’d be fired.

Once all the files are entered at a central location, the VA offices around the country could seriously cut back on their staff, since they would just enter data into a central program. No more paperwork, no more time spent searching for said paperwork. No more moving said paperwork around from on top of file cabinets to floors of other apparently empty rooms. No more repairing floors that are sagging due to too much of said paperwork. And no more dealing with frustrated veterans.

It should be possible to get this done in about two years, I’m guessing, but since this is the government we’re talking about, let’s give them five years, just to be on the safe side.

From then on, when a veteran walks into Veterans’ Affairs and needs something, he would just have to give his name and a photo ID and up pops his file. No more rooms, no more boxes, no more pointless paperwork.

So what do the former staff of those slacking-off VA offices do? And the no doubt well-paid person who was in charge of overseeing all the offices and solving problems where they arise, who would also be fired? Well, I hear that one of these days there are going to be plenty of jobs improving the country’s roads and bridges.