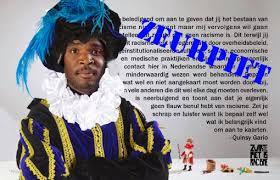 In a reply to a comment by Onno on one of my posts about Zwarte Piet, I mentioned that the Netherlands is still in the Stone Age when it comes to racial sensitivity. Onno responded by pointing to Ferguson.

I came across this post by Sociological Ruminations, which referred me to this article by John Blake for CNN about racism in America. It discusses the events in Ferguson, a book by Eduardo Bonilla-Silva, Racism without Racists and findings by Howard J. Ross about bias.

Though Dutch racism is different from American racism in some ways, I feel that the article has elements that address both the Zwarte Piet issue in the Netherlands and the Ferguson issue in the States.

“The more we assume that the problem of racism is limited to the Klan, the birthers, the tea party or to the Republican Party, the less we understand that racial domination is a collective process and we are all in this game.”

I could expand that, for Onno’s benefit, to include that as long as we see racism as limited to American phenomena like the Klan and Ferguson, you will not understand your own racial advantage in the Netherlands.

I believe that Dutch society as a whole is way behind American society as a whole when it comes to race relations. (I’ll explain later in this post.) At the same time the Zwarte Piet issue is not as severe as the events in Ferguson.

I don’t know. Racism is relative to society, I suppose. What’s shocking about Ferguson is obvious to everyone, including the Dutch: yet another unarmed black youth shot down like a dog. Everyone has always known about the institutional racism of American police. Sadly, horrible as Ferguson is, it’s no surprise. The reason the Zwarte Piet issue so shocking to me is that it shows in no uncertain terms that the famous Dutch tolerance does not equate acceptance.  At all.

In order to battle both the racism involved in the shooting of Michael Brown and that of Zwarte Piet, we first have to acknowledge it.  (The article addresses the emotional impact of the word “racist” as opposed to “racially biased”. If that difference in terminology will get people to read a little further before checking out, then that’s fine with me.)

I have brought up before the irrelevance of the difference between intent and effect in race relations.

In Ferguson, which is a predominantly black town, 50 of the 53 police officers are white. So are the mayor and the police chief. Was that intentional? Does it matter? The impact is racial inequity, and in a country where the police can kill with impunity anyone they claim threatens them, the results are very often bloody.

In the Netherlands, white people argued that Zwarte Piet wasn’t meant to be racist, that they didn’t realize how offensive it was to black people, and that therefore it wasn’t. Of course, the discourse has moved–or should have–beyond initial intent, because now the Dutch white population is fully aware how offensive Zwarte Piet is, and yet they persist.

Blake’s article makes a distinction between overt racism and institutional racism or racial bias.

Overt racism, as in directly depicting and perceiving black people as somehow inferior and not to be taken seriously, is a big no-no in the States. The vast majority of white Americans would be appalled by Zwarte Piet for that reason.

Zwarte Piet is a prime example of overt racism, and to add insult to injury, the majority of white Dutch are strongly against changing Piet, even though black people are finally speaking up and it has now been made perfectly clear to whites that it’s offensive to black people.

When Sinterklaas arrived in the Netherlands a few weeks ago, Dutch people gleefully posted pictures on Facebook showing Sinterklaas with his Pieten who are–ha ha, nanny nanny boo boo–black like they’ve always been. Ouderwets gezellig. The in-your-face, we-don’t-give-a-shit-about-you message to the Dutch black community couldn’t be clearer.

People who post these things on Facebook would probably say that they feel that “ethnic minorities” are “attacking” the “Dutch culture”. They may not feel they are racist on a personal level, but they are in fact overtly excluding–or at the very least being openly dismissive of–a whole group of citizens from a discussion that effects that group.

This overt racism is what I refer to when I claim that the Dutch still live in the Stone Age when it comes to racial sensitivity.

“The first thing we must stop doing is making racism a personal thing and understand that it is a system of advantage based on race.”

This is what America and the Netherlands have in common: the notion that racism is personal–the idea that if I as an individual don’t act like a racist toward another individual, then there is no racism. Or racial bias if you will.

My Dutch friends who post those “Zwarte Piet as usual” pictures would never (knowingly) behave inappropriately toward a black person. However, their dismissing a whole Dutch ethnic group’s feelings as zeuren (whining) is the act of the racially advantaged.

Onno claims that Quincy Gario, the black man who initiated the push to change Zwarte Piet, is racist himself, that he sees everything in the light of race relations. Blake’s article mentions Howard Ross, who points to various scientific experiments that show that we all see everything in that light.

The difference between the racial bias of blacks towards whites and that of whites towards blacks is that whites in America and the Netherlands are the advantaged group. The fact that blacks are also biased doesn’t make white arrogance okay.

The article mentions countless experiments and statistics that show that white Americans are often not (fully) aware of this racial advantage.

People who are “colorblind”, who claim that race doesn’t matter to them, are often the same people who are opposed to affirmative action, because actively recruiting black police officers would be looking at race. Blake  and Bonilla-Silva argue that this is the biggest problem in American race relations today: not the overt racism of the KKK–they are a small minority, frowned upon by the vast majority of whites–but rather the racism of those who claim not to be racists, who are nevertheless keeping the institutional inequities in place.

In the Netherlands the problem is still twofold: the overt racism which simply excludes whole groups of people from the prevailing culture as well as the insensitivity of supposedly non-racist whites in regard to their own advantage and privilege.

Either way, we all still have a lot to learn.

3 responses to “Zwarte Piet and Ferguson”