From No Way to Okay to Every Day 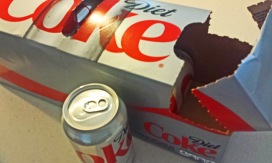 This morning I read a BBC article about Coca Cola. This reminded me of conversations T and I had when we were living together in the Netherlands.

Being American, he drank Coke.

When I was eleven and helping my family set up our bungalow tent in Remouchamps, Belgium, a guy gave us a tip for getting rust off tent poles: Coca Cola. So that stuff couldn’t possible be good for you. Of course I told T this story several times.

T and I would tease each other. I’d say that I’d never allow our future kids to drink Coke, and he said he and the kids would have stashes of cokes hidden under the bed, to drink when I wasn’t home. They’d have Coke parties and burping contests.

Fast forward twenty-two years: T still drinks Coke. Our kids–17 and 14–still don’t. And Me? I drink Diet Cokes. Way too many. Several years ago I discovered Monster drinks, which have even more caffeine, so now I drink Coke and the occasional–okay, daily–Monster.

My kids are the ones telling me not to drink so much Coke, and they get especially loud when I grab a Monster at the convenience store.

Do you eat or drink something you used to swear you would never?

2 responses to “From No Way to Okay to Every Day”