Due to the high water table, most of New Orleans’ dead aren’t buried but rather entombed in “cities of the dead”. More info here.

If you visit Nawlins, a cemetery  should be on your must-see list.

This is what the Saint Louis Cemetery No. 1 really looks like: 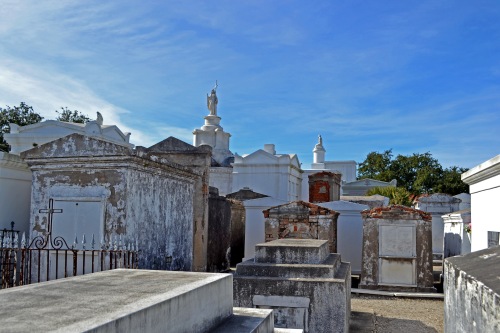 And this is what you imagine while you walk around: 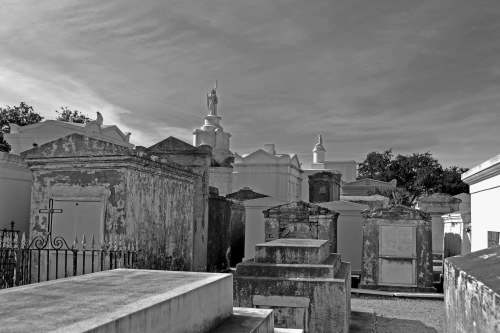 It has been the setting for many a movie scene. Does anyone remember seeing this one before?

And one movie actor even built his tomb there, ready to accept him when he’s done with this world. Tell me if you know who. One thing is certain: he has no taste.

Marie Laveau, New Orleans’ foremost voodooienne in the 19th century, is entombed here. The X’s are the result of one independent tour guide’s claim that Marie will grant your wish if you scratch three X’s on her tomb. According to our tour guide, Marie doesn’t appreciate this at all.

The Saint Louis Cemetery No. 1 is a catholic cemetery, but some protestants are buried there as well, in a separate section. I don’t know if Agnes Liddle was a cat lover, but I’m pretty sure that at least three cats have gotta love her grave.

And so life goes on, in and around the cemetery. The 19th-century Congo Square–where slaves and free people of color met to play the drums and dance–is now called Louis Armstrong Park and high-rises can be seen beyond the statues overlooking the dead. New Orleans is a city of contrast and contradiction, of old meeting new, and this is certainly one of the places where that is most apparent.

This entry was posted in Travel and tagged above-ground cemeteries, New Orleans, Saint Louis Cemetery No. 1, travel. Bookmark the permalink.