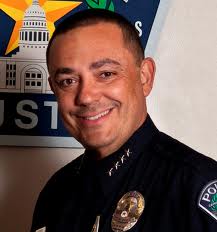 I’m an Austin resident. I drive my kids downtown to school every morning and back every afternoon. Since I’ve been driving the same route twice a day for five years, I’ve befriended some of the homeless who stand on corners I almost always stop at. These guys sleep mostly under bridges and overpasses.

One of the guys recently told me that he was woken up in the middle of the night by a few police officers who told him he couldn’t sleep there under the bridge.

He asked if sleeping was a crime, to which the officers responded that he was camping and according to the no camping ordinance, he was breaking the law.

A day or two later I was asking another homeless guy if he could use a tarp and/or a sleeping bag. He told me he didn’t have any use for a tarp, because it would attract the police, because having a tarp would make it camping.

So is that it, Chief Acevedo? Is having a sheet of plastic to keep out the worst of the wind and rain the difference between being homeless and camping?

Camping is what you do for fun. You pack your tent or your RV, gather your wife and children, set your home alarm system and you go to a campsite for a day or two, or a week or two, even. You spray yourself with mosquito repellant and you sit by your campfire, eating your barbecued chicken, and you contemplate the  importance of enjoying the simple pleasures of life.

When you get sleepy, you crawl into your state-of-the art tent, into your three or four season sleeping bag on your nice insulating, full-length mat. Or you step into your RV, and crawl between the sheets on your queen-sized Tempur Pedic bed.

And when you’ve had enough of those simple pleasures, you pack up and head back home to your nice air-conditioned/heated house. You lock the door behind you, you take a warm shower, you put on clean pajamas and you roll into your comfortable bed, contemplating how camping makes you appreciate the luxuries you have when you come back home.

Camping is a choice. Being homeless is, well, life, for the homeless. When those officers tell my friend he can’t sleep under the bridge, where should he go?

I suggest you try homelessness for a while, Chief Acevedo.

Go sleep under a bridge in this weather, wrapped as best you can in a blanket or a sleeping bag, with no camping mat to stop the cold coming up from the ground and nothing to stop this wind that is providing a wind chill factor of below freezing from going right through your sleeping bag.

And if you don’t sleep a wink, well, too bad. You’ve got to go stand at a traffic light for hours the next day, breathing in the fumes of cars accelerating on green and putting up with dirty looks from judgmental snobs until you have enough money to get yourself a warm cup of coffee and a sandwich.

Want to go home yet?

Nuh-unh. You’re homeless, remember? The next cold night is approaching, and you go back to your spot under the bridge. Again you can’t get warm enough to fall asleep. So when the sun finally comes up, and once the temperature has risen a bit, you crawl out of your sleeping bag and into the sun and fall asleep so fast it’s as if you were knocked on the head.

When you wake up, you find that someone has taken your sleeping bag and your few other belongings. You were sleeping so hard, you never heard them coming.

Feel like crying yet, Chief Acevedo? It won’t help you. You’re just a homeless bum and to most people you’re invisible. You stand at the traffic light again and if you’re lucky you’ll make enough for some food before it gets dark. Without even a sleeping bag, you’re going to have to look for a place out of the wind, like a recessed spot in front of some door, perhaps.

The problem with that is that you’re vulnerable to passersby. Bullies who might kick the living shit out of you. You’re lucky, Chief Acevedo. By morning you’re cold and wet, but you made it through the night. And you’re luck doesn’t end there. When you’re standing at the traffic light, someone gives you a sleeping bag and–oh wow–a tarp!

A tarp! This could make quite a difference in your situation, Chief Acevedo! The difference between catching pneumonia and well, not catching pneumonia. You’re looking forward to actually sleeping tonight. You have a sleeping bag for warmth and a tarp you can wrap around yourself and your belongings to keep that wonderful warmth in and the freezing wind and stealing bastards out.

So that night you crawl into your sleeping bag, wrap your tarp around you and you’re just dozing off when a couple of cops shine their flashlights in your face and tell you to get up. No camping here.

What? Camping? Yes, that tarp makes it camping, and you’re breaking the law. So move, you stinking bum. Go on, get up, take your stuff and get out of here.

And no, you still can’t go home. You have no home. Your wife and children? You don’t have a wife and children, Chief Acevedo. You lost contact with them years ago. Friends you can stay with? Nope. And of course hotels and motels might as well be on a different planet, because you have no money.

What are you going to do now? The cops are waiting until you collect your stuff and walk off. Are you going to throw your precious tarp in the dumpster and be a law-abiding, freezing homeless guy or are you going to wait until the police have left, crawl back into your sleeping bag and wrap that tarp around you again as soon as you can?

Still think you’re camping, Chief Acevedo? Or is it surviving?

Okay, you get to go home now. But it’s time to stop harassing the homeless and show some compassion. Come on, have a heart.

Oh, and have a happy Thanksgiving and a Merry Christmas. May they both be nice an toasty.