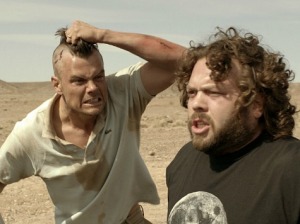 Well, I suppose this NaBloPoMo is a good opportunity to publish a few a-propos-of-nothing posts.

For instance, I’d like to draw your attention to one of the best movies I’ve seen in a long time. It premiered at Austin’s South by Southwest Film Festival last year and only had a limited release in a few cities, so chances are you missed it. But not to worry: it’s out on DVD and on Movies on Demand.

The movie is Scenic Route, written by Kyle Killen, directed by Kevin and Michael Goetz, and stars Josh Duhamel and Dan Fogler.

Two long-time friends on a road trip are stranded on a little used road in the desert after their truck breaks down. Hungry, cold and seriously dehydrated, the young men start attacking each other’s life choices. Talk quickly evolves into physical aggression in the middle of nowhere.

During most of the movie, all you see is these two guys on the side of the road, in or near their truck, arguing. And I was sitting on the edge of my seat throughout. I watched it again the next day with B, and it was still riveting. So I can’t say enough about the writing. Not a lot of people can pull that off.

Screenwriter Killen was originally from … Austin! He created the television series Lone Star, Awake and Mind Games and he wrote the screenplay for The Beaver, directed by Jodie Foster, starring Mel Gibson as a man who communicates only with his beaver hand puppet.

As far as I can tell, this is the first movie the Goetz brothers have directed together. Before Scenic Route they were award-winning directors of commercials. I can’t wait to see their next movie.

Actors Josh Duhamel and Dan Fogler both did an excellent job and will be taken a lot more seriously after Scenic Route, I think.

Interesting interview with the directors and actors here.
And check out this review.