Sinterklaas: Now I’m Getting to the Point

In yesterday’s post I described the way Sinterklaas is celebrated in the Netherlands. Except I left something out. It’s kind of a biggie.

Sinterklaas has helpers. Originally there was just one helper, but soon there were at least two of them, and when Sinterklaas arrives in the Netherlands or in a town, there are lots of them. They are called Zwarte Piet–Black Pete or Black Peter.

People of African descent compare this to the American blackface of the blatantly racist times before the Civil Rights Movement. They claim that Zwarte Piet is racist and that he should either be taken out of the celebration, or changed. 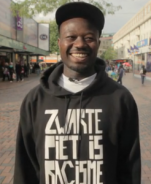 They brought the matter to the attention of the human rights body of the United Nations. The UN looked into it, concluded that the Dutch government was failing to respond to complaints of discrimination, and told the Dutch prime minister that Sinterklaas should no longer be celebrated, because it’s a return to slavery.

Many white Dutch people claim that this is nonsense–this is our tradition; we’ve always had Zwarte Piet, it has nothing to do with racism or slavery and it’s not at all like the American blackface.

I became aware of the whole controversy because my Dutch friends have been sharing all kinds of pro-Zwarte Piet memes.

So here’s what I think.

I grew up with Sinterklaas and Zwarte Piet. When I was sixteen I was even one of the Pieten on Sinterklaas’s steamboat when it arrived in Amsterdam, because my best friend’s father was head of the Dutch children’s television. I loved Sinterklaas and everything about it.

Here’s the thing: it doesn’t matter where Zwarte Piet came from. It’s irrelevant if it originated in slavery or in Moorish sailors in Spanish ships who got paid like everyone else.

I don’t know how often Zwarte Pieten act foolishly; I don’t remember acting silly when I was a Piet. I was too busy throwing candy and collecting drawings from children to Sinterklaas and trying not to get too far behind the procession to think of acting one way or another.

When I google photos of Zwarte Piet, most of them look like people behaving normally, but dressed up and with make-up on. They don’t behave like white people in blackface in pre-Civil Rights America.

But that, too, is irrelevant.

Zwarte Piet is Sinterklaas’s knecht, which translates as a lowly aide, pretty much a servant or a stable boy. Black people have a problem with this stereotype also being a servant to the white bishop.

Most of the time Piet doesn’t act much like Sinterklaas is the boss; in fact, I always felt that the Pieten seemed in control. They often hold the reins of the Sint’s white steed. They steer Sinterklaas through the throng and onto his throne. When Sinterklaas has questions, the Pieten know the answer.

And guess what? Not relevant.

Racism isn’t only about intent. Zwarte Piet started when Holland was almost completely white, so sure, it was never meant to insult, because there simply weren’t any black people in the country who would have been insulted. Strictly an inside joke, as it were.

Now the Netherlands is culturally quite diverse and there are enough people of African descent to have a voice. And they are telling their fellow citizens that they feel Zwarte Piet is demeaning.

I completely understand the knee-jerk reaction. Yes, it’s tradition. Yes, we grew up with Zwarte Piet. And we didn’t end up being racists. Etc.

But after the knees have jerked a bit it’s time for some calmer reflection.

Look at the drawings of Zwarte Piet and tell me they’re not racist.

If you don’t see it, then that’s the problem.

I grew up–once I returned to the Netherlands from Australia at age 10–with those drawings and worse than those in children’s books like Tin-Tin (Kuifje) and–closer to home–similar stereotypical drawings in my paternal grandfather’s comic books, and I never thought twice about them. I was never appalled. 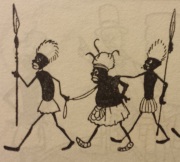 And that’s a pretty sad statement about my awareness of racial matters as a 10-year-old.

I showed my children the way my grandfather drew black people, and they flinched. And so they should. And so should we.

Think about it. The book below was removed from libraries long ago because of its racism. 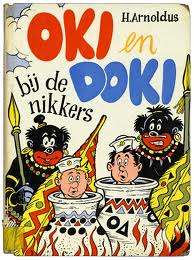 But this image of Zwarte Piet is still okay?

The idea behind political correctness is that if you take away hurtful language, images and traditions, people stop thinking in those terms. And it works. It’s simple psychology: if you don’t use the words, you don’t think the thoughts. If you don’t have the racist images, you don’t see people in terms of stereotypes.

What I found particularly interesting about the knee-jerk reactions was this image I found on Google.

We never had slavery and segregation in the Netherlands itself, at least not to speak of, and so we also didn’t have a civil rights movement. We felt that if we didn’t call black people niggers and we didn’t behave all awkward when a black person was in the room, then we weren’t racist. We were never schooled in the subtler aspects of racism by a vocal, empowered black citizenry.

We Dutch people–or at least my friends and I–pride ourselves on the diversity of the culture, but this quote tells quite a different story. Black people are only part of Dutch culture as long as they shut up and adapt. The moment they point out that Zwarte Piet is racist, it’s suddenly very clearly them against us, against our culture, which they have no say in.

what makes Zwarte Piet magical is the fact that he isn’t recognizable as any normal person.  An uncle can disguise himself as Zwarte Piet, change his voice a bit, and his little nieces and nephews never have a clue. I didn’t even recognize myself when I looked at my pitch-black face in the mirror.

Is it really the end of the world if Zwarte Piet isn’t black anymore?Would your 3-year-old cry his little heart out on Sinterklaas if Piet’s hair was a rainbow clown wig and if his face was green or purple instead of black?

The answer, of course, is no.

Your 3-year-old will have exactly the same experience minus the unspoken racism. Your child will either be scared shitless of that weird person or he will be thrilled to meet a real live Piet.

The only one with pangs of regret will be you, and you’ll get over it in time. Traditions change. Clearly it’s time for the Dutch to let Sinterklaas evolve and get serious about the Netherlands being an inclusive culture.

In the next post in this series I wonder if it’s really such a big deal to change Zwarte Piet.

27 responses to “Sinterklaas: Now I’m Getting to the Point”