You know you live in the live music capital of the world when your kids get early release on the Fridays of both Austin City Limits Music Festival weekends because most kids don’t show up to school those days anyway.

Yes, this year, for the first time, the ACL festival will take place over two consecutive weekends.

I can’t go this year, unfortunately. I’ve actually only been twice since we moved here, because the tickets are incredibly expensive. Not when you consider how many concerts you get for the money, of course, so if you can afford to spend a few hundred dollars for an unforgettable experience, have at it. 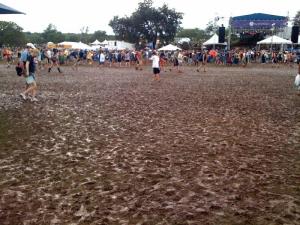 The last time I went was two years ago, when rain had turned the recently resown Zilker park grass into a reddish-brown mud bath. Wearing shoes was hopeless, because I lost one every other step, and once I got over my fear of stepping on hidden metal or glass, it was amazingly liberating to walk around barefoot in cool, squishy mud up to my ankles.

Ah, good times, good times… So to stay in the Austin music spirit here on my couch, I thought I’d do a few posts about some of Austin’s great musicians.

I have to start with Stevie Ray Vaughan, because it’s his birthday today. Here’s a video you can play and listen to while you read the rest. Enjoy:

I have taken the liberty to lazily copy and paste the following information from Wikipedia, though I have dropped some of the more general links and replaced Wikipedia’s link to Austin’s Auditorium Shores park with a link that focuses on Vaughan. It has a good photo of the statue and a google map indicating its exact location.

“Stephen “Stevie” Ray Vaughan (October 3, 1954 – August 27, 1990) was an American guitarist, singer, songwriter and record producer. […] Vaughan is best known as a founding member and leader of Double Trouble. With drummer Chris Layton and bassist Tommy Shannon, they ignited the blues revival of the 1980s. With a career spanning seven years, Vaughan and Double Trouble consistently sold out concerts while their albums frequently went gold.

Vaughan was born and raised in Dallas, Texas, and briefly lived in Graham, Texas. […] At age 17, he dropped out of high school and moved to Austin to pursue a career in music, joining groups such as Krackerjack, the Nightcrawlers, and the Cobras. In 1977, he formed Triple Threat Revue, a band that regularly performed around Austin and eventually evolved into Double Trouble. In 1982, Vaughan and Double Trouble performed at the Montreux Jazz Festival in Switzerland, catching the attention of musicians David Bowie and Jackson Browne. Bowie asked Vaughan to play on his upcoming studio album Let’s Dance and Browne offered the band free use of his personal studio in Los Angeles to record an album.

In March 1983, veteran record producer John Hammond Sr. of Epic Records signed Vaughan and Double Trouble and released their debut album, Texas Flood in June of that year. While successfully touring, the group released the albums, Couldn’t Stand the Weather (1984) and Soul to Soul (1985), the latter of which featured keyboardist Reese Wynans. Although his career had progressed successfully, Vaughan checked into a rehabilitation hospital in Atlanta, Georgia to give up a cocaine and alcohol addiction and returned to touring with the band. In June 1989, they released In Step, which earned them a Grammy Award for Best Contemporary Blues Performance. On August 27, 1990, Vaughan died in a helicopter crash following a performance in East Troy, Wisconsin.

Vaughan […] was influenced by blues musicians including Albert King, Freddie King, Otis Rush, and Muddy Waters, as well as rock guitarists such as Jimi Hendrix and Lonnie Mack. His guitar playing, for which he has received wide critical recognition, reflected the pentatonic blues scales. He ranked number seven on Rolling Stone’s list of “100 Greatest Guitarists” and was posthumously inducted into the Blues Hall of Fame in 2000, the same year a memorial statue in his honor was erected in Austin’s Auditorium Shores park. Vaughan is widely considered one of the greatest musicians to come from the state of Texas.” (http://en.wikipedia.org/wiki/Stevie_Ray_Vaughan)

The next post in this series is about Janis Joplin.