Who’d A Thunk It: Wilhelmina in the Ozarks

We were driving in southeastern Okalahoma and then into southwestern Arkansas last week, in beautiful, lush green hills, when what did we see? 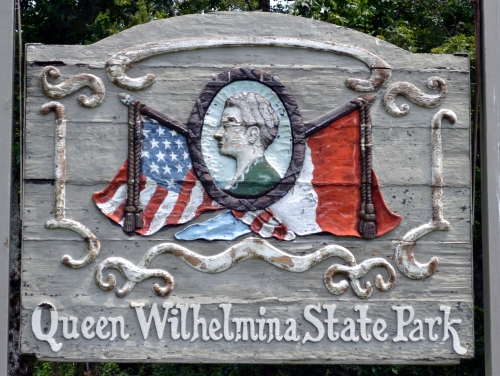 Yes, so I had to Google this to find out why on earth there was a Queen Wilhelmina State Park in Arkansas, USA.

It turns out not to be quite as interesting as I had hoped.

According to the state park’s website, when the Kansas City, Pittsburg and Gulf Railroad (KCP&G) were building their railroad from Kansas City, Missouri to Texas, they decided to build a top notch resort, and because a lot of the investors in KCP&G were Dutch, they called it the Wilhelmina Inn.

Wilhelmina was to be queen in September 1898, and the lodge was finished in June of 1898. Queen Wilhelmina never visited and the original lodge fell into disrepair after little more than a decade, when KCP&G was sold and the new owners neglected it. (It never takes much neglect for American buildings to start falling apart.) The lodge that was built in its place burned down. Now they’ve built a third lodge, which is closed for repairs at the moment. So it seems Queen Wilhelmina’s name is attached to somewhat of a jinxed project, so far, at least.

But it’s a beautiful spot and it was definitely a surprise. Since I really didn’t know much about Queen Wilhelmina other than her role in WWII, I decided to Google her a bit while I was at it.

Well, now I remember the reason I didn’t know much about her is because royal history bores me to tears. (Except, of course, as a translator :-))

So let’s see what stands out:

Technically, she was queen from 1890–not 1898–to 1948, when her daughter Juliana succeeded her. But since Wilhelmina was only ten when her father, Willem III, died, her mother Emma was regent until her eighteenth birthday in 1898.

She had a half-brother  who was so upset that his father had remarried that he refused to see his baby sister when she was born. He died when Wilhelmina was four, which made her the crown princess.

Her relatives had long names, and like most European royalty they were either English, German or Russian and all related somewhere down the line. I won’t bore us with any of that.

Her parents were very mysterious about her name for the first few months, until they finally came out and said her name was Wilhelmina. So we can all stop complaining that it took the British royals two days to decide on George. 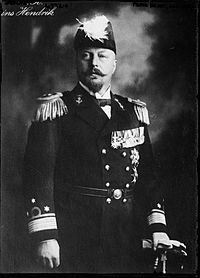 In 1901 Wilhelmina married a German Heinrich, who then became Hendrik. She was pretty much given the choice between him and one other guy, also a German.

In 1902 she had typhoid fever and almost died, which would have meant the end of Dutch royalty as we knew it. The crown would have gone to a German and the Netherlands would probably have become part of Germany. In which case I would now be writing rave reviews of every single Oktober Fest and Oma’s Restaurant in Texas, accompanied by pictures of me as a dirndl and T in lederhosen, both holding up steins with beer sloshing out.

Only to barely miss being killed when her husband failed to notice a tram and ran into it with his car. You’ve got to wonder; there can’t have been a lot of motorized traffic at that time, and it was slow.

Anyway, as queen she was opinionated, which the government didn’t always appreciate, but the people certainly did during World War II, when she kept their morale up via Radio Orange, broadcast from London.

She received the Order of the Garter in England, only the second woman to get it, and apparently Churchill said she was the only man among the governments in exile in London.

Wilhelmina wanted to have her home–Paleis Het Loo–demolished after the war because the Nazis had used it but the government decided against it. Which is probably a good thing, because it was finished in 1686, and considering its age, the Nazis had merely passed through. She moved out, though, and lived in a mansion in The Hague but returned to Paleis Het Loo when her daughter Juliana took over as queen.

During the last years of her reign she was frustrated that Dutch politics picked up seemingly as usual after the war. She died at age 82, in 1962, the decade that began to see the real changes resulting from World War Two.

So now I’m curious. What did she not like about pre-war politics and how did she envision post-war politics, and to what degree–if any–did politics eventually change for the better in her eyes, had she been alive to see it? Stay tuned for a future post on the subject.

Maybe. Or maybe you are the reader who knows all about it and can tell the rest of us. In which case: have at it in a comment.

3 responses to “Who’d A Thunk It: Wilhelmina in the Ozarks”