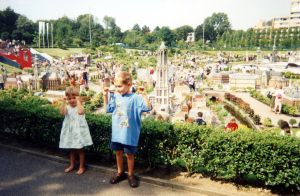 Our last visit to the Netherlands was eleven years ago, when B was six and R almost three. That was also the last time I spoke Dutch for any length of time with other adults.

I pretty much stopped speaking Dutch to the kids six years ago, when R’s language therapist advised against it, since R was having a hard enough time with English. I hadn’t spoken more than a few sentences in Dutch since then. Sure, I read Dutch almost every day online, but that’s different.

Last week two Dutch friends came to visit for a few days after attending a conference in Houston. It’s amazing what spending a few days with Dutch friends, speaking Dutch, will do to a Dutch-deprived mind.

First of all were the odd things that came out of my mouth if I didn’t pay attention. I would combine the Dutch and English version of a word, thus inventing entirely new words like “gebreusd”, and I would translate English words literally to make things like  “meningloos” for “meaningless”, etc. Then I would hear it and think, no, that doesn’t sound right. But at least I’d realize it right away.

Having to switch from Dutch for my friends to English for everyone else was sometimes too much for my brain. It gave up being able to tell the difference. So when the kids were arguing and I told them to quit it in my strictest and snappiest voice, they’d respond simultaneously with “What are you saying?” and “I don’t know what that means.” Only then would I realize that I’d been chastising them in Dutch. Everyone would laugh, including me, and my authority was out the window.

I also suddenly started calling Austin Amersfoort, which was the town I lived in before emigrating. While speaking Dutch, my brain was back to thinking Amersfoort was home.

I read something decades ago about Dutch people who emigrated to Australia in the 1950s and were now becoming senior citizens. Those suffering from Alzheimer’s often lost their ability to speak English. It made things extra hard for their caretakers, who usually didn’t speak a word of Dutch. These immigrants didn’t start speaking English on a daily basis until they were adults. I’ve been pretty much bilingual since the age of five, so I wonder what would happen with my languages if I became senile. I can just picture it: “And what would you like for dessert today, dear?” (As if you’d get a choice, but anyway.) “Hmm, I lust well what hopjesvla, alsjeplease, with some flocks erover gesprinkeld”.