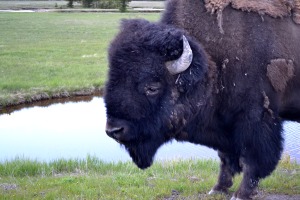 The wildlife was incredible. Of course there were the buffalo–or the bison, as B kept correcting us–and this time they had calves, so we kept our distance a bit more, except when we were in or near the car. 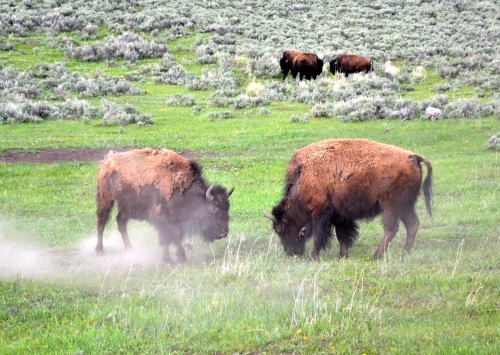 The Pronghorn Antelope, North America’s only native antelope, was less shy this time of year, so I got some halfway reasonable pictures. 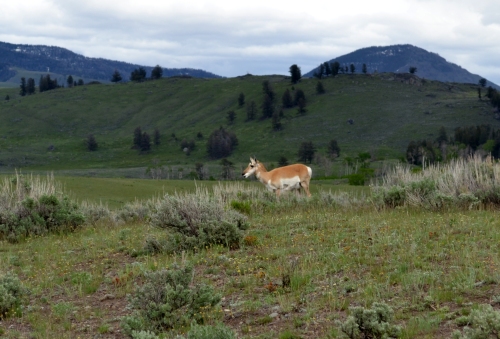 Of course, the elk were a dime a dozen.

At one of the park junctions they walk around town like they own the place,

and the park rangers go around putting warning signs wherever the elk are.

I did get pretty close to an enormous bull elk.

I circled around and managed to get a shot of Mr. Elk with my family.

This elk was very alert and again, I didn’t get nearly as close as to the marvelous bull elk I photographed last year, but it was still a cool experience. 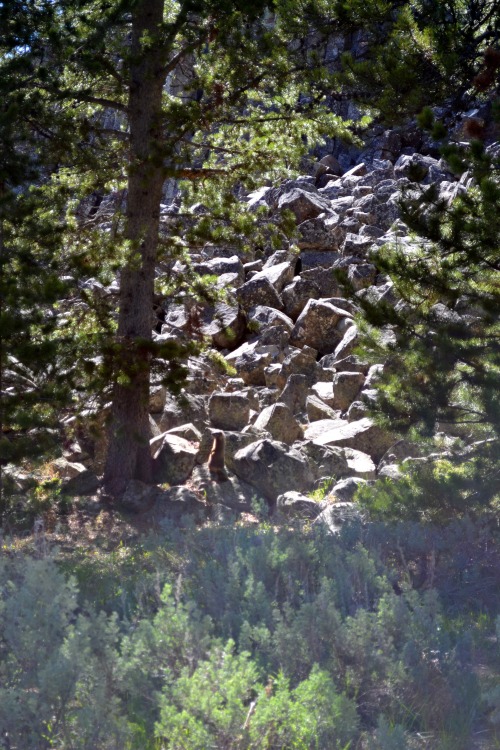 I stayed put, expecting the marmot to turn any second and disappear into the rocks behind him. But he didn’t.

He came closer, eating little yellow flowers and looking up at me every few seconds. He was careful, but he really did like those flowers, so he stayed when I lay on my belly to get pictures at eye level. And then he decided to see how it was to look down on me. So he stood up… 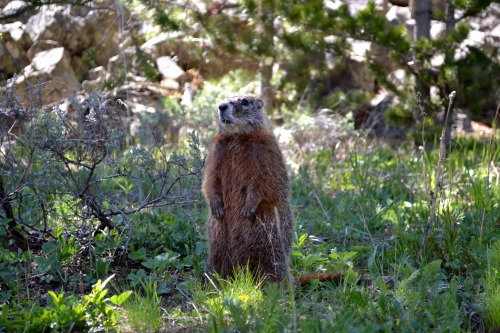 and then he made himself even taller. I didn’t move a muscle. 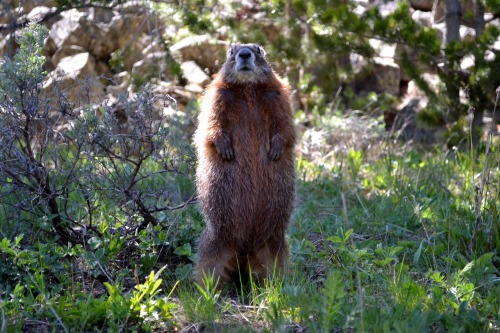 Maybe because I stayed so still, he decided I wasn’t a threat, and he continued to come closer,

When he was no more than a foot away from me–I had my camera on flower setting by now–and I was just beginning to think about backing off a little, he apparently had the same thought, and made his way to another patch of flowers. 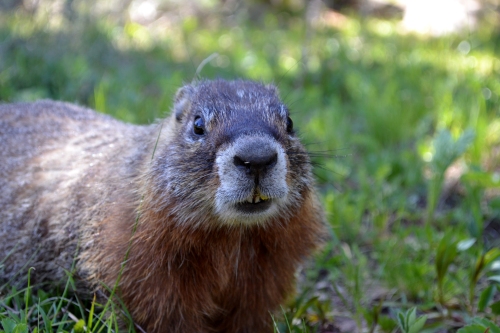 We saw a mother black bear and her two ginger cubs in a little valley.

The next day we saw a black bear making her cub go up a tree.

As most kids, he obeyed and went up the tree, 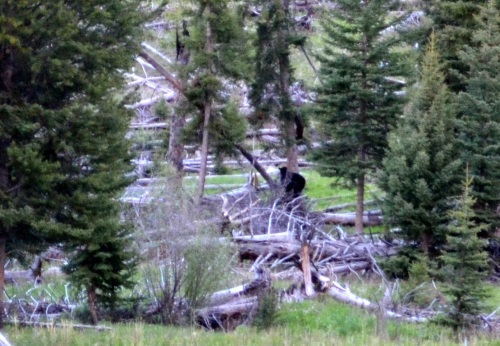 Only to come down again the moment Mama turned her back.

A little later, in the dark, we saw this black bear grazing by the side of the road.

We saw badgers, also a first for me. They seemed to be digging for baby ground squirrels. 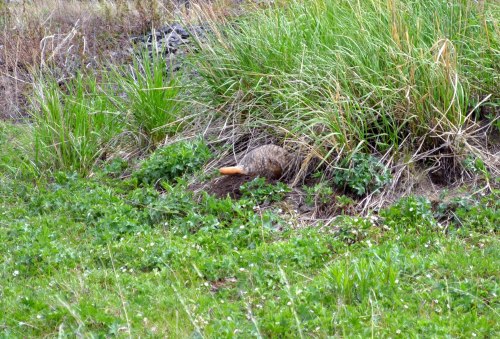 We saw black-tail deer and a fawn.

One day we saw what one photographer said was a wolf. I was so excited to finally get pictures of a wolf!

But B, our animal expert, thought it was behaving strangely for a wolf.

By now we were standing near another photographer. B said it looked like it was hunting insects, which is more what a coyote does. 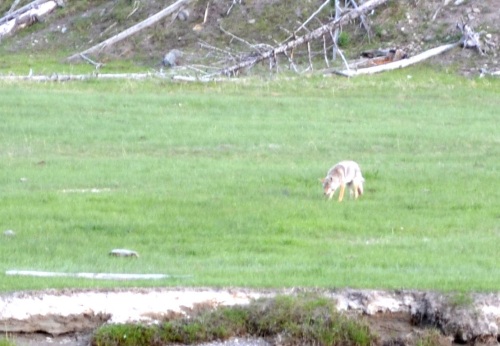 And the photographer confirmed that it was a coyote. I was so disgusted!  A mere coyote?! It took me a full fifteen minutes to recover and remember that I had never seen a coyote hunting, either, so that it was still pretty cool.

On the one walk where I didn’t join them, T and the kids saw two bull snakes mating. When they approached, the snakes uncoiled and slowly went separate ways. Fortunately I had given R my camera, so she got a few pictures. 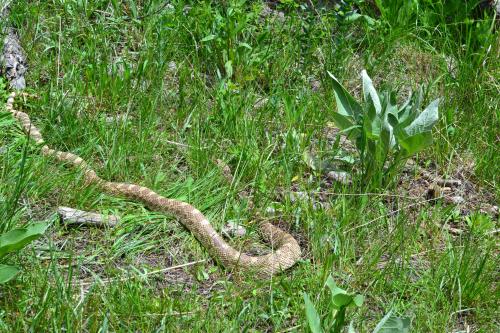 We also saw a female red fox, but even with cropping it was just an orange blur.

It’s amazing how much information you can glean about individual animals. Everyone shares with the next person what they have heard from a ranger, or from a Facebook page, or from photographers and other wildlife observers.

Apparently this fox and her mate had had a litter of two cubs. But a badger came when one of the pups was in the den, and although the female fought it tooth and nail, jumping on top of the badger as it was digging and drawing blood from its head, the badger managed to get into the den. All this time the male fox was pacing nervously back and forth, and being completely useless. However, a moment later the cub crawled out. Apparently the foxes had a good stash of dead ground squirrels in the den, and the badger went for those first, so the cub was lucky.

The badger decided to take over the den for a while, so the female made a shallow, temporary den a bit further up the hill. But the badger raided that one, too, this time killing her two cubs. After that, the male fox left, but the female fox was still hanging around. When we saw her she seemed to be dozing a bit, looking up every now and then at the photographers below her, and then lowering her head to her paws again. We got her story in bits and pieces from three or four different people, spread out over two days.

Through someone’s big scope, we also saw a black bear chased away from a carcass by a grizzly, way up a mountain side. The black bear hung around until two more grizzlies arrived. Then one of them chased the black bear up a tree. In the meantime another black bear had been heading up that mountain side with her cubs, but when she smelled the grizzlies, she took her kids into a patch of trees and stayed put.

That’s another thing: people are very generous with their scopes. They’re much better than binoculars, but they also cost a pretty penny. When we came up on the couple with their binoculars trained on the bears at the carcass, we were the first. They let us look and told us what they had seen so far. They were planning to leave in a few minutes to head back home in Idaho. But more people came, and they filled everyone in and offered everyone a view of the unfolding drama. By the time we left the scene it was a party, and the couple with the scope figured they’d probably be leaving for home the next day.

There’s a lot of wolf drama, as well. All of it can be followed on blogs and Facebook pages like this one, with much better photos than I can get with my little camera.