Yellowstone Do-Over Part 1: Getting There

Our three-week RV trip of the Rockies and Yellowstone National Park last summer (which started here), ended sadly when B’s appendix ruptured and we spent the last four days in the Cody, Wyoming hospital instead of in Yellowstone. This summer we had one week, and lots of T’s flying miles, so we went to Yellowstone for a do-over.

A crazy change of subject? Bad segue? Not at all! The images used for the last two posts are pictures I took on this trip.

Early the first morning we flew from Austin to Las Vegas, Nevada and from there to Salt Lake City, Utah. We had bought a bag on wheels. It was the first time in my life that I wasn’t lugging around big duffel bags. I felt quite grown-up.

In Salt Lake City–where we arrived around 11 am with the time change–we rented a car, which took an hour, but it gave me the opportunity to snap a shot of the bottom of a concrete parking garage ramp. 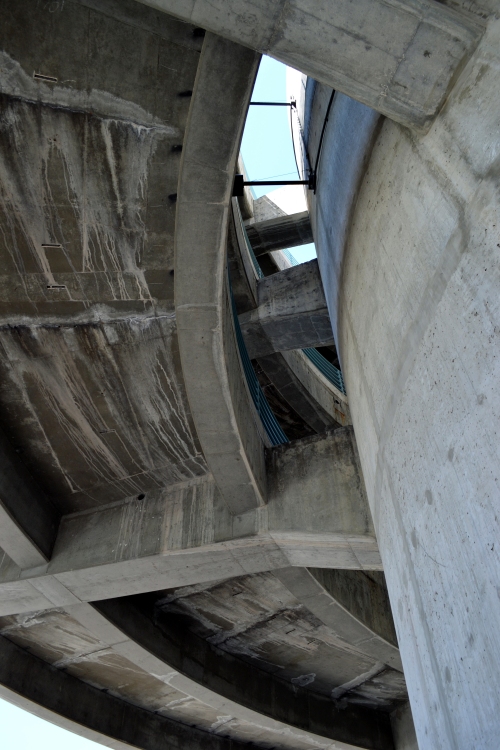 We spent the rest of the day driving through north-eastern Utah, south-eastern Idaho, and into Montana, to West Yellowstone, a tiny town just outside the west entrance to the park. It’s basically a group of hotels and restaurants and souvenir shops that sprouted up when the accommodations at the park junctions could no longer keep up with the demand.

It was all beautiful, of course. We took the scenic route for half of the way, but when we were at Bear Lake (photo above), we realized it would take us another five or six hours at this rate, so we headed for the highway. But Idaho is gorgeous from the highway, too.

We arrived in West Yellowstone just before it was completely dark. The first moose had been spotted, by R. We saw mule deer standing statuesquely by the side of the road, and we flashed by hundreds of beaver dams and saw a few beaver domes. We had our first look and feel of mountain snow and we looked forward to seeing lots of wildlife the next day. It was still spring in Yellowstone, so the animals would be behaving differently. 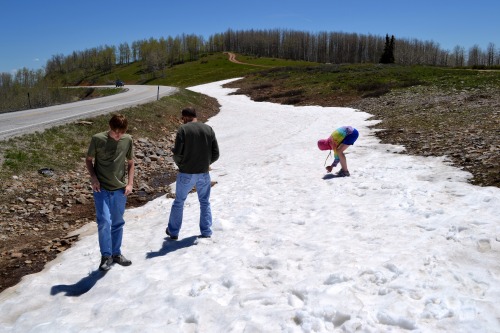 In order to tell the difference from my Rockies posts from last summer, I’ve decided to do the next posts thematically.