Anything Helps 3: There But for Luck Goes Your Child 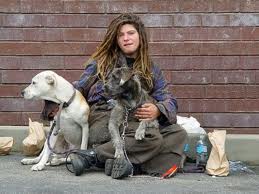 Disclaimer: I know most of my readers are compassionate people. So this is directed toward–well, you’ll know who you are.

From the first time I came to America with T, then my boyfriend, I have been shocked at the number of homeless here. I remember walking in Washington D.C. at night with T and one of his college friends, and my horror when I realized that the elongated pile of rubbish on a bench was in fact a human being. And that they were everywhere, on every bench.

In Austin there are homeless people at traffic lights on many of the major roads, especially those near overpasses. There are no sidewalks along most major throughways, but deep tracks have been worn in the grass and dirt by homeless people walking or rolling or limping back and forth, back and forth, all day, every day, holding up signs with different variations of “Please help me”.

Austinites are relatively generous toward the homeless. Or so I hear.  I drive more than 90 miles a day, all around Austin (don’t ask), I stop at a lot of traffic lights, sometimes right up front, but at least as often halfway the line or at the back, and I think I can count on the fingers of one hand the number of times I’ve seen anyone in line ahead of me give a homeless person money. Obviously people do, else it wouldn’t be worthwhile to stand at traffic lights with signs. My point is that it must take an awful long time to get very little money.

My 13-year-old daughter is always thinking of ways she can help when she’s older. For a long time, her dream was to be filthy rich when she grows up, so she can have a posh hotel with a nice restaurant for homeless people, where they would be treated with respect and where everything would be for free.

I love her idealism, but the questions she asks nowadays force me to explain that it’s a complicated problem. Being homeless is the only thing these people have in common. Everyone has his or her own story. Some people can’t stand to live between four walls, some can’t handle a permanent residence without first having psychiatric treatment or help for addictions, and others would need someone to check up on them for the rest of their lives, to make sure they take their medicines, keep their place clean, etc. But this being America, that’s not going to happen.

We talk about the people who can work, and how some of them do get back in the workforce because there are organizations that help with interview clothes and such, until they’re back on their feet. And she could volunteer at those organizations when she’s older, if she wants. But all we can do for the hopelessly homeless we meet at traffic lights is not judge them and just give them some money so they can buy food at the end of the day, or other needful things.

I was driving the kids home from an after-school activity the day before yesterday, and I was stopped at a traffic light, in the middle lane, talking with my son B about his day at school, looking at him in the rear view mirror as I was doing so. Suddenly R, beside me, began to cry. I asked what was the matter, and she pointed out a man standing on the narrow median to the left of the cars in the lane to the left of us. He was young, half hiding his face behind his sign, and sobbing.

I scrambled for my purse, even though, as a rule, I don’t give money if I’m in a middle lane, because I don’t want anyone to get run over because of me. But at that moment the light turned green. “I’m pretty sure that man didn’t want to be homeless,” said R with a bitterness a 13-year-old shouldn’t need to experience.  And, no, I didn’t think so either.

From the brief moment that I saw the young man, he struck me as someone who had only just become homeless. He was obviously keenly embarrassed about having to ask for money, so he must’ve very recently hit rock bottom. And now he was standing on that median the day after the coldest night in Austin so far, with the sun going down to another cold night, and he had reached the end of his emotional rope.

And people sat in their cars, not two feet away, looking straight ahead. As I was feverishly thinking of what to say to prevent my daughter from losing complete faith in humanity, I was screaming inside. I don’t care how bad the economy is, and how much everyone is struggling; if you can afford to drive a car, you can afford to give a guy a quarter.

Maybe the guy had a young wife and a baby somewhere, hoping they didn’t have to spend another night out. And if that idea doesn’t pull at your heartstrings, that’s fine. Maybe he was a drug addict, a nutcase, a loser, a complete bastard or in any other rationalized way not your problem. But he was someone’s son.

Well, any child of mine won’t end up on the streets, you say.

Really? Can you be 100% sure of your complete control over what happens with or to your children? Even after your death?

If you have children, nieces, nephews or grandchildren under 18, you can’t say yet that they won’t be schizophrenic, for example. I bet there’s no reasonable parent, however republican, libertarian or otherwise disinclined to feel responsibility toward strangers, who wouldn’t hope that people help out their child if, for whatever reason, he or she was out on the streets and beyond their help.

So for God’s sake, Pete’s sake, or Smokey Bear’s sake for all I care, give something.

You think that, if you gave money to every homeless person at every traffic light you stop at, you’d be on the streets, too?

I seriously doubt it. Like I said, I drive more than 90 miles a day all over town. Most people don’t drive quite that much. I give something to every homeless person at any traffic light where the timing works out, and that ends up being about four times a week. Even if you give just a quarter, that’s only a dollar a week, on average. If you drive 90 miles a day, which you probably don’t.

By giving even just a quarter, you’re not only helping someone out financially. Even more important is the fact that you’re putting much-needed dough in someone’s emotional bank account. It says, “I see you and I acknowledge that you’re human.”

If everyone did that it would make life just a little bit easier for all concerned. After all, you wouldn’t have to dread coming to yet another awkward stop next to yet another human being in need whom you have to pretend not to see even though he/she is standing right beside your windshield, begging for help. Sobbing, even.

The next post in this series is about the mustache man.

This entry was posted in Austin, Food, homeless and tagged America, Amerika, Austin, daklozen, DPchallenge, giving money to the homeless, handouts, homeless, Opinion, society, there but for, thuislozen. Bookmark the permalink.

8 responses to “Anything Helps 3: There But for Luck Goes Your Child”