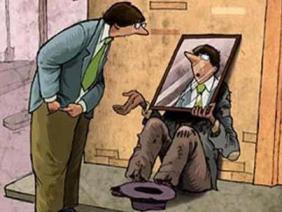 One of the definitions of “entitled” is having the right to something. Republican presidential candidate Mitt Romney uses the terms “entitled” and “entitlement” as dirty words. It’s clear from his speech at a fundraiser dinner that he feels people should not be entitled to food, health care or housing. Meaning that if people don’t have the money to pay for food, shelter or the doctor, they can’t expect the government to help them. To Europeans, that is pretty shocking.  In Europe we call entitlement programs parts of the social safety net.

The terminology illustrates the fundamental difference in attitudes toward people who need help.

I grew up in the Netherlands with the saying that you can measure the degree of a country’s civilization by the way it treats its weakest members. Because what kind of person are you if you can walk past a man who’s dying in the street and not feel any responsibility? What kind of society would that be? Not the kind most feeling people would consider ideal.

Americans grow up with the saying that you can do anything you put your mind to. Which means that if you are not successful in life, you must not have wanted it enough. Which means that you have only yourself to blame if you have no money for food, shelter or healthcare. And so people can indeed walk by–or drive by–without feeling any responsibility.

Oh, but most Americans aren’t like that. People aren’t that unfeeling.

No? Just look at how few people sitting in their big cars at a traffic light give money to a poor sod with one leg and a sign around his neck saying “Anything helps”. The vast majority just sits there, with only their car window separating them from abject poverty, and they manage to completely ignore it. How unfeeling can you get?

It’s this idea that Americans are self-made–they got to where they are because they put their minds to it–that allows them to separate themselves from society’s weaker members. Republicans and extreme libertarians are best at this. Republicans are still outraged at Obama for pointing out that people with successful businesses didn’t get there all by themselves. They used infrastructure paid for with taxes, they used employees educated with taxes, they were able to function because rules allow them to exist in relative peace and safety–rules put in place by society and upheld by police, who are paid with taxes. But that doesn’t fit with the myth of the self-made businessman.

Aha, gotcha! Because in his speech Romney was talking about people who don’t pay income tax, so they don’t contribute to society.

Maybe they don’t, but they might have at some point. The poor one-legged sod on the street might have been a productive, taxpaying member of society before he lost his leg. The vast majority of the elderly who are on Medicare were productive, taxpaying members of society before they got old. And some people whose income is too low to pay taxes might start paying income tax if they could get a better job. Which they might with a little help, like childcare, or job training, or simply a roof over their head so they can shower every morning and be presentable at a job interview.

But those who have been so successful, who are so self-made that they can afford to pay $50,000 for a seat at Romney’s fundraiser dinner–which is more than twice as much as the annual income at the poverty line–can afford to keep the less fortunate at such a distance that they all look the same: “47%, dependent on government, people who feel they are victims”. Romney and his followers are “not going to worry about those people; they have to take responsibility for their own lives”.

Romney’s speech illustrates how completely out of touch the rich are in this country. And it never ceases to shock me how that is possible. How the difference between the richest and the poorest can be so big. How rich is rich enough, for Pete’s sake?  Apparently even being able to afford a $50,000 dinner isn’t rich enough, because those people still see the poor as a threat, as flies that have to be shooed away from the sugar pot.