Living in a Hospital: The Room

Let me know if this has changed over the past twenty years, but in the Netherlands, hospital beds were two to a room, with a curtain that you could close for some visual privacy. You could get a single room, but they were called first class and you probably had to pay out of pocket for one. So, although it’s another thing that makes healthcare so outrageously expensive in America, I do love the hospital rooms here. All single, and super nice. 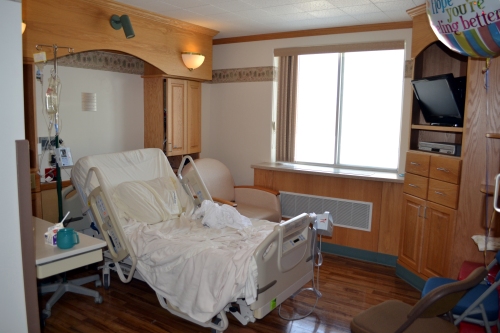 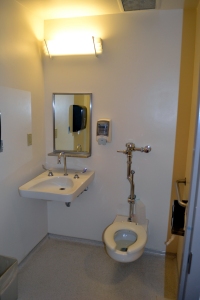 were impressed with B’s room in the hospital in Cody, Wyoming a few weeks ago. It seemed very spacious, with an easy chair that folded out to a bed that fit exactly between the bed and the window.

It had lots of cabinet space and a spacious bathroom. And of course TV and a DVD/VHS recorder for his viewing pleasure. And good wifi.

Now B is in Dell’s children’s hospital here in Austin, and the room is almost twice as big–bigger than many a Dutch living room.

It doesn’t come across in the photos (which I took with my phone), but there’s a love seat that folds out to two beds, and even though they are perpendicular to the bed, there is still about two feet between B’s bed and the folded out love seat beds.

The chair looks awkward there, but we put it on that side of the bed to better watch DVD’s, and have a foot rest with one of the fold-out beds folded out.

There’s the entertainment/cubby/desk area, again with perfect wifi, so T has been able to work here, and I’m blogging away.

Two nights we all slept in this room. T and I on the fold-out beds, and R on a mat on the floor. We could easily have a ten-person slumber party here. And you could dance in the bathroom.

The room in Wyoming was very quiet, while this room in Dell’s is not soundproof near the window, so if there’s a loud family meeting in the room next door, it’s annoying. But then I think of the Dutch two-bed hospital rooms, with only a curtain for privacy, and the limited conversations you could have when visiting, and I realize we really can’t complain.

Oh, and visiting hours are all day.

4 responses to “Living in a Hospital: The Room”