The other animal that we saw a lot of in Yellowstone was elk. Apart from when you’re in the car, it’s not a good idea to get too close to bison, but I got pretty close to a beautiful male elk. I think I was about eight feet away at some point. That’s also not recommended; the grammatically annoying signs everywhere say that “all wildlife are dangerous”. 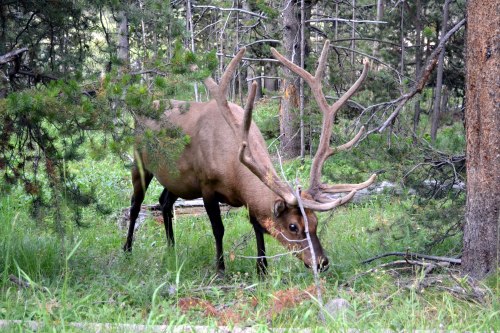 I was on the road, slightly higher than this handsome guy, so his size doesn’t come across.

If I had to guess, I would say this elk was about seven feet long, and his antlers were about three feet long.

Elk spend quite a bit of their time in the forest, grazing, like this one was, among the trees, and those big antlers have got to be a pain. He was constantly having to turn his head and carefully maneuver to get at the best grass, and then he’d have to back up equally carefully in order not to get stuck in tree branches.

But he did it all very gracefully, looking up at us (there were about six people standing around, taking pictures, me being the closest and on my knees) and then grazing some more. 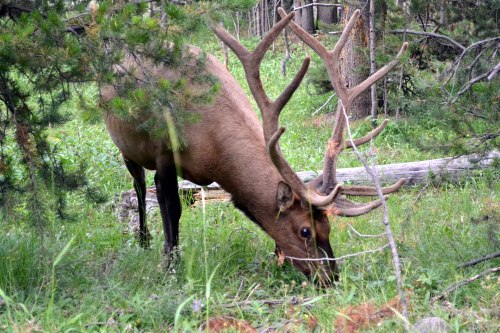 At some point he decided he’d had enough of all the attention. It was clear he wanted to cross the road, so we all backed up a bit to give him his space. When he was on the road I got a real sense of his size. A car was driving up, and he turned toward it, raising his head (which probably made him at least eight feet tall) as if to say, “See my antlers and stop”, paused briefly to make sure the car was indeed suitably impressed and stopping, and then calmly walked off into the trees on the other side.

That moment on the road only lasted a few seconds, and I was in too much awe to take a picture. I have never seen anything quite so majestic.

8 responses to “The Rockies: Elk”