The next day we woke up to find ourselves in a wonderful campground, with lots of trees and little trails going off behind our site. Not that we spent any time there. We left after breakfast and didn’t come back until well after dark.

B still complained of a belly ache, but we figured it was now due to not having eaten any solids for two days. So during the day I regularly made him eat cheerios.

We saw so much that first of our three planned days in Yellowstone. It was just incredible. Let me start with the mud volcanoes and sulfur pots. 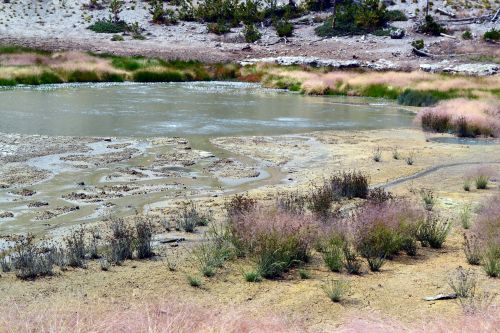 Most of Yellowstone is a caldera, a bowl formed when a volcano erupts and the earth collapses. Wikipedia has a good explanation of calderas. The volcano that caused the caldera is still active, and that is why there are so many geothermal features. 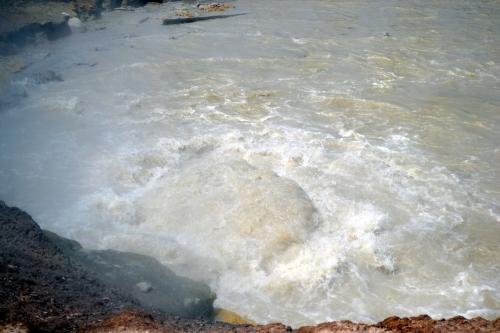 Every now and then there’s an earthquake that releases heat and sulfuric acids, which make the mud boil, and the landscape changes in that area.

Trees burn, or otherwise they topple because their roots have been cooked. 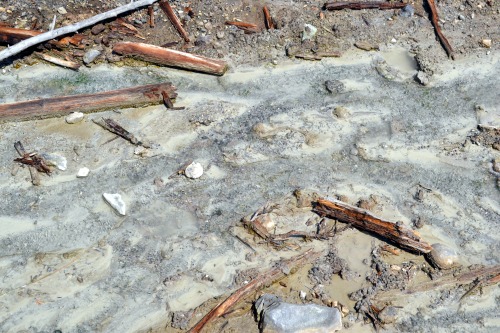 And of course Mother Earth cares nothing about human infrastructures.

Click here for a good explanation of the mud volcano, the sulfur pots and fumaroles in Yellowstone.

The landscape also affects animals. Below four ducklings whose mother was probably killed by a hawk or a coyote.

Waddling confusedly from one mudpot to the next, expecting water, they were prime targets for hawks.

Of all the geothermal features in Yellowstone, the geysers, especially Old Faithful and the Steamboat Geyser, are the most spectacular, but we didn’t get round to seeing them that first day. It took us most of the day to cover about twenty miles. The main reason that it took that long was the stops we made for wildlife, which I’ll cover in the next post, or two, or three.