For the next two weeks I’m having a photo blog of our trip to the Rocky Mountains.

The first day we left Austin in the evening and drove to Fort Stockton, in west Texas. I didn’t count that first day. But the next morning in Fort Stockton, I was the first one up, so I took a walk around the campsite. It was just an ugly campsite in the middle of nowhere, for people on their way from somewhere to somewhere else, but there was a very short trail into the desert. The sun wasn’t up yet, so I was hoping to see some critters.

Yep, we’re definitely in the west.

And then I got lucky. Do you see the young coyote in the distance? 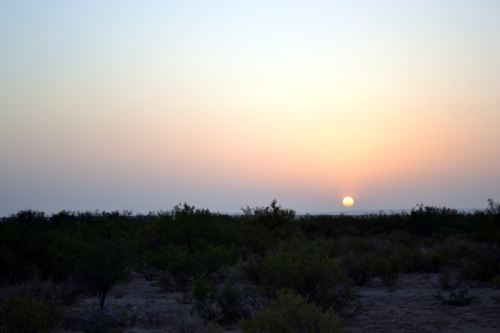 Apart from birds, this was the only other living thing I saw up and about. 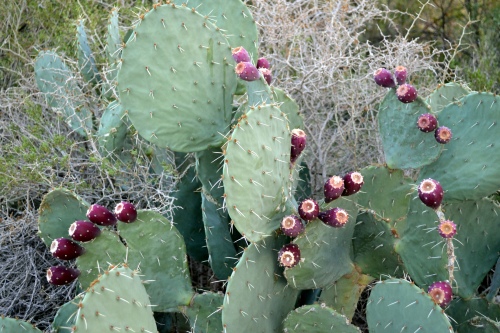 Atunas are edible, but they have virtually invisible little spikes, as I found out the hard way.

After plucking dozens of tiny spikes out of my fingers with tweezers, we took off. Further west, and then north clear across New Mexico. It was sad not to have any time to visit our favorite spots and some undiscovered ones, but it had to be done to get to Colorado. I did take some pictures at a rest stop, though. 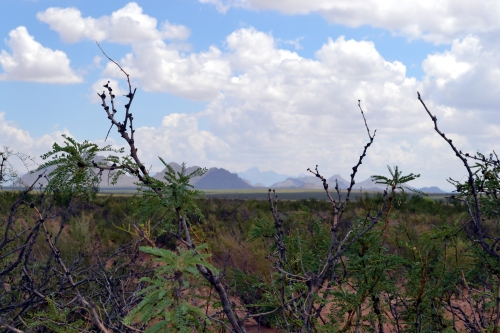 The foothills of the Rockies in the distance.

The yuccas have bloomed, and now the empty seedpods are all that’s left on the woody flower stalks. A guy at the rest stop was selling the stalks as walking sticks.

That’s all she shot. We got to Durango, in south-western Colorado, around 11 pm.
Stay tuned for day two, the first day in the actual Rockies.