The Netherlands in WWII : Lessons Learned

This is the eleventh post in a series about American high school students’ impressions on a presentation about the Netherlands in World War Two. Click here for the introduction to said presentation.

Authority Before the war, the Dutch were a very law-abiding people, with great respect for authority. During the war, the majority of the Dutch police cooperated with the German occupiers. After the war, everything changed. Civil disobedience is an accepted form of protest and authority figures such as the police are constantly challenged. It’s quite normal in the Netherlands that people talk back to a police officer, and argue with him/her.

For its part, the police training in the eighties–I know, a bit slow on the uptake–emphasized individual responsibility; never again was “just following orders” to be an acceptable excuse.  Also, the police are not allowed to ask questions that are irrelevant to the situation.

So when I first moved to America, my husband always had to remind me to keep my mouth shut if we were pulled over by a cop, or I’d get us arrested. I’d keep my mouth shut, but later my husband would have to suffer my ranting about America being a police state, where you can get arrested for telling a cop that it’s none of his business when he pulls you over for speeding and then starts to ask where you’re going, where you’re from, what you do for a living, etc.

The slippery slope Once the Germans occupied the Netherlands, after bombing the blazes out of Rotterdam (more on that in a later post), their aim was to get the Dutch to accept the occupation. So the German soldiers were ordered to be nice to people on the street, and homeless children from Rotterdam were sent by train to summer camps in Austria.

The occupation measures were put in place very gradually, so in the beginning people would think, “Well, it’s only this one little thing, and it’s only temporary.” But in the end practically the entire Jewish population was deported and killed, and the rest of the country was intimidated, terrorized, and starved.

So whenever a law is suggested that, in the very worst case scenario, could make it easier for a dictator to grab control, that’s what we Dutch look at. Even if that possibility is extremely remote. The idea that it could never happen is gone forever, because the occupation has shown that anything that can happen, does happen, and will happen again unless we’re constantly vigilant.

I told the students about a conversation I had shortly after arriving in America. I hadn’t learned yet that talking politics is not done, and anyway, I wasn’t the one who started it.

A high school friend of my husband’s somehow began talking about the benefits of the death penalty. Being Dutch, and always up for a good argument, I took the bait. We were arguing back and forth, and my standpoint was that really bad criminals should get life (literally) in prison instead of the death penalty. To which Death Penalty Guy said that it costs the government a lot more to keep a criminal in prison his entire life than to just kill him.

This poster (from around 1938) reads: “60,000 Reichsmarks is what this person suffering from a hereditary disease costs the People’s community during his lifetime. Comrade, that is your money too. Read ‘[A] New People’, the monthly magazine of the Bureau for Race Politics of the NSDAP.”

My response was to point out that by that reasoning, all sorts of people could be put down to keep costs low, like the elderly, psychiatric patients, the disabled. And I pointed out that that was exactly what Hitler did.

Death Penalty Guy totally flipped. He couldn’t believe I was comparing him to Hitler, etc. I would have liked to have the opportunity to explain that I wasn’t comparing him to Hitler, just that his reasoning could, in extreme circumstances, lead to measures such as Hitler took. If you take one step in that direction, then the next step is easier, and the next step even more so. But I didn’t get the chance, because Death Penalty Guy stomped off, too mad to talk anymore. 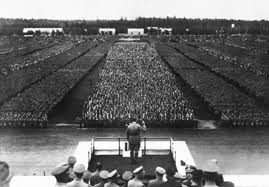 Idolizing individuals To us Dutch people, the hype around electing a single person, like here in America is weird. We elect political parties, that happen to be headed by someone, but we vote on the issues, not on who’s the most charismatic. Because again, in a perfect storm anything can happen. See more in my series of posts about the Dutch political system, starting here.)

Race and religion on forms The Dutch have always had an elaborate, but very efficient bureaucracy. Every town had registers–thick ledgers that showed exactly who lived where, and what their religion and race were. It was way too easy for the Germans to round up all the Jews if they got their hands on the town registers.

So since the war, it is against the law for government entities to ask for someone’s religion  race, and it is never asked on forms. In America, practically any form you ever fill out asks for your race. Sometimes I fill out “human,” other times “NOYB” (none of your business). When people insist, I explain that I don’t answer out of principle.

Knowing what can happen when children are indoctrinated into believing their country is the best in the world, that they are superior, and that their country comes first, anything to do with children in uniforms and instilling national pride freaks me out. Singing the national anthem at every possible occasion, with everyone making the same gesture, pledging allegiance to the American flag at age five–I can’t stand all that stuff.

My son B was in Boy Scouts for about a year. One of his friends and his mother really wanted him to join and I finally caved. But seeing my blond little boy in a brown uniform was hard to swallow, and when he wanted to quit, that was fine with me.

And eagle symbols give us the heebie-jeebies.

Following are some comments by students.

“The big thing that made an impression was nothing that happened during the war and occupation but the aftereffects, with the citizens’ entire attitude about certain stuff changing almost from night to day.  An example is with authority, before the war they were respectful, now, not so much. Another change is that the government does not keep any record of personal information like religion or race anymore where they used to have huge records of everything. I find this food for thought for lack of a better description because in the US we have never had an experience like this so we are much more naive and assume the best and other things that in the Netherlands people would not do. It is really fascinating to me they way they behave, and it seems to me that they have learned from history unlike so many others, even those who seem to have undergone similar conditions the lessons aren’t always learned but the Netherlands have.”

“I found it the most interesting when she highlighted the lasting effects of WWII on the Dutch people. This side of things is never really mentioned and I enjoyed how she highlighted this. She made points such as that Dutch People believe in the slippery slope and tend to judge situations by the worst-case scenario since this is what happened to them in the war. Another example is that the government keeps no records of citizen’s race, religion, or other information in case it falls into the wrong hands. She included a first hand story about when she had to fill out her US paperwork and was horrified when she had to list her race and religion. The German’s used this to find Jews when they took over Dutch towns. This is why the Dutch resistance would burn public records so the German’s couldn’t do this. The last example is that in the Netherlands people don’t like to see children in uniform because of the Hitler Youth and that when she saw B. in his Boy Scout uniform she was terrified. I find it very interesting that she did the effects it had on the Dutch since we only get to hear how it affected us. I’m glad she came and it was very interesting.”

I wasn’t actually terrified when I saw my son in his Boy Scout uniform, just horrified.

The next post is about the after-effects that still ripple even today.

5 responses to “The Netherlands in WWII : Lessons Learned”