The Netherlands in WWII : The Hunger Winter

This is the ninth post in a series about American high school students’ impressions on a presentation about the Netherlands in World War Two. Click here for the introduction to said presentation.

On June 6, 1944–D-Day–the allied troops landed in Normandy. The idea was to move across France, Belgium, the Netherlands and into Germany in one fell swoop, ending the war by Christmas.

By September 1944, the forces had moved up enough that the next step was to take the bridges over the various rivers that run more or less from east to west in the north of Belgium and the south of the Netherlands. This operation, which relied on perfect cooperation between the British and the Americans, as well as perfect timing, was dubbed Operation Market Garden.

If ever anything deserves the current teen term “epic fail,” it is Operation Market Garden. Everything that could go wrong went wrong, and as a result most of the southern part of the Netherlands was liberated while the northern part had to wait until May of 1945.

In order to thwart German troop movement during this operation, the Dutch government in exile had ordered a railway strike. It lasted six weeks. In retaliation, the Germans cut off all supplies (food, clothes, medicine) to the west of the Netherlands, including Amsterdam. And they forbade food transports in general.This lasted until the end of the war.

So the people in the cities had no food, the gas had been shut off, and there was no coal, which was used for heating. Coal came from the mines in the south of the Netherlands, and because of the front now running across the Netherlands, the coal supply was cut off.

And wouldn’t you know it: that winter was one of the coldest in decades. With no gas for cooking and no coals for heating, people burned any wood they could get their hands on. In Amsterdam, where the entire Jewish population was gone by then, their empty houses were torn apart for the wooden doors, window sills, floor boards, etc. The paving between the tram rails consisted of small wooden blocks, and they were pulled up for fuel. 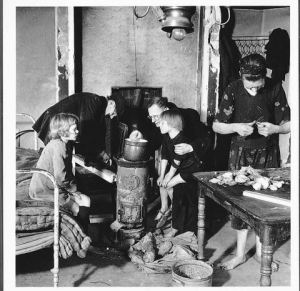 People moved their entire households into the living rooms, beds and all, so they would only have to keep one room warm. Which they did with small wood-burning stoves and emergency table-top stoves.

With no food transports, city folk were starving while farmers had mountains of grain, potatoes, sugar beets, etc. that they couldn’t get to market. Pretty much anything on wheels had been confiscated, and so had all the horses and livestock, so even transport by old-fashion horse and wagon was impossible.

People from the cities had to go get food from the farms themselves. Of course, the able-bodied men couldn’t do this, because they had to hide from forced labor roundups. So it was the task of women and girls and old men to find food for their starving families.

Of course, farms closest in to the big cities ran out of food first, so these women, girls and men had to go farther and farther afield, up to some eighty miles, to get food from farms. Those who still had bikes went by bike. The Germans had long since taken all rubber tires, so they had pieces of garden hose or wood tied to the wheels. Or they just cycled on the rims. Imagine cycling that way for 80 miles! Those who didn’t have bikes anymore used whatever they did have with wheels: children’s carts, strollers, even toy strollers.

They would have valuables with them on the way to the country, to barter for food. Anything from silverware to Persian rugs. On the way back those with bikes also had to walk, because they would have a sack of potatoes or later sugar beets or tulip bulbs hanging across the frame.

The journey was hard, not only because people were cycling on bumpy bikes or on foot, pulling toy carts, wearing threadbare clothes and shoes in the lowest temperatures in twenty years. Theft was a big problem. On the way over one’s valuables could be stolen, and on the way back one’s food. I read one account of an old man who stopped briefly to pee in the bushes, and when he got back to his bike, his food was gone. 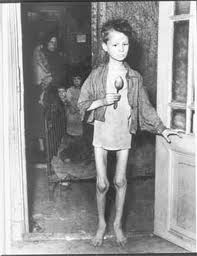 The trek took several days, so people slept in haystacks and barns. Any stop was risking theft. And you couldn’t very well return empty-handed when your children or siblings looked like this boy in the photo.

My grandmother made these journeys to her relatives with farms in the north. She used to tell me how hard it was, half starved herself, having to cycle on garden hose tires in freezing headwinds across open country, wearing pretty much everything she had.

In the period between the failed Operation Market Garden and the liberation on May 5, 1945, some 20,000 people starved to death in the Netherlands.

Following are some comments by a student.

“I also thought it was interesting how they talked about the men hiding and the women going out and getting food. I find this almost stereotypical because the women were always the ones doing the work. I would also think that it would be very challenging because I think Mrs. Gray mentioned something about the bike tires being stolen so they only had metal tires and so they wouldn’t get very far with tires like that. The women were so desperate for food that they would walk miles just for food.”

The next post in this series is about the end of the war.

25 responses to “The Netherlands in WWII : The Hunger Winter”