The Netherlands in WWII : The Gun 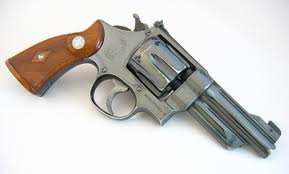 This is the seventh post in a series about American high school students’ impressions on a presentation about the Netherlands in World War Two. Click here for the introduction to said presentation.

I told the students the following story as an example of how even ordinary people, who were not in the resistance, who were just trying to survive, were faced with decisions that affected lives.

Shortly before I emigrated to America, my father and I were going through some old boxes of my grandfather’s stuff. My dad was in a reminiscent mood, I guess, and feeling the need to make sure family stories had been told. Because he told me a story that I hadn’t heard before.

Opa was infatuated with guns–well, to Dutch standards anyway. He had a pistol. He had never used it; he didn’t even have bullets for it. It was just something he had in a box somewhere, as a curiosity.

Opa and Oma and their three children–my father was the youngest at age four–moved away from Rotterdam because of the bombing. (More on the bombing of Rotterdam in a later post.) He drew a comic strip for a newspaper in Rotterdam, and he continued to do that from their new town. He also wrote a booklet of anti-German poems that was distributed in the area by the resistance, but that was as far as he went.

He was just a father like so many, strongly anti-German, but simply keeping his head down and trying to get his family through it all.

One of his friends, who was with the resistance, knew about this pistol and he really wanted it. Opa didn’t want to give it to him; the risk was too big. If the friend was ever found with the gun he would be shot, and his family would be at risk, too. Also, the man would probably first be tortured to find out who had given him the gun. And then Opa would suffer the same fate.

But the friend kept nagging him about it, telling him how useful the gun would be to his resistance activities, and at some point Opa caved and gave him the gun. A few days later, the Germans caught the friend red-handed, in the very act of cleaning the gun in his shed.

He was indeed tortured and then shot. Apparently he never told how he got the gun, because the Germans never came. But you can imagine Opa’s fear and horror.

My dad told me how Opa felt guilty about that his entire life. Guilty that he had given the man the gun, guilty about having had a role in his friend’s wife becoming a widow and his children fatherless, and guilty thinking how much pain he must have endured while not giving the Germans Opa’s name.

Following are some comments by students.

“The thing that made the biggest impression on me was when she told the story about her grandfather and how his gun led to his friend’s death. Some of her other stories were sad, but this one really shows how dangerous this time was, even for ordinary people.”

” What left the biggest impression on me was the story of her family. I thought it was so interesting to have her standing in the room with us, telling us about what happened to these people who were related to her. I felt like it gave a personal connection to the story, and it really put things in perspective for me. It wasn’t just another story about people in the war, because if one thing had gone wrong in any of those situations, she might not have been there today.”

Surprising though it may seem, I honestly have never considered that I may not have been here because of things that happened to my grandparents during the war. I suppose because this goes for everyone who had family in the Netherlands during the war.

If my Opa’s friend had mentioned his name under torture, my Opa would have also been tortured and shot. The rest of the family would probably have survived, but their lives would have been different. But the friend didn’t mention my Opa’s name.  Opa and the rest of the family were lucky. That’s not something to go on about too much when so many people were not so lucky. 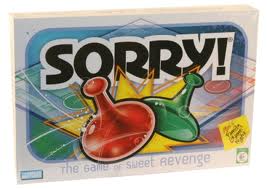 So why do I go on about my family’s almost-disasters or could-have-been disasters here? Well, first of all, nothing bad happened to anyone in my family, on either side. The could-have-been stories are the ones I have. But I do think they illustrate what a game of chance the whole war was for everyone. Literally like the game Chance, or Sorry, as it’s also called. More about this in a later series about The Assault, one of the best novels ever written about the Netherlands during World War Two. The series starts here.

The next post in this series is about a day bed.

One response to “The Netherlands in WWII : The Gun”