The Netherlands in WWII : The Occupation 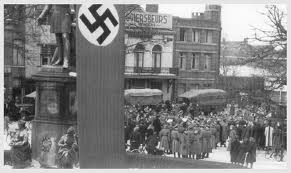 This is the fourth post in a series about American high school students’ impressions of a presentation I gave on the Netherlands during World War Two. Click here for the introduction to said presentation.

Technically the war only lasted five days for the Netherlands. After the capitulation the Germans took over our government, and the Netherlands was occupied. Arthur Seyss Inquart ran the government and answered directly to

The picture on the right shows the Germans in the courtyard of our parliamentary buildings.

The NSB was the Dutch version of the German NSDAP, the German national-socialist party. Arthur Seyss Inquart put them in control of most government functions. Some others also sympathized with the Germans. They helped the German cause and the successful occupation of the Netherlands. We call them collaborators.

Curfews. The Germans restricted movement of the general populace by placing a curfew on the population. No one was allowed outside after dark.

Blackouts. The British Royal Airforce (RAF) flew across the English Channel and over the Netherlands on their way to bomb targets in Germany. There was no GPS. Pilots navigated by looking down. If no lights were on in towns and cities, it made it harder for the RAF to orientate themselves and find their targets.

So there were blackout rules. All windows had to be completely covered at night. Outside lights had to be covered, people were told not to open their doors or windows at night to see what was going on outside, and no matches or flashlights were allowed outside. People were encouraged to report neighbors who didn’t stick to these rules.

Confiscations. The Germans confiscated anything they could use in their war effort. Gasoline became scarce almost right away. Above shows an ingenious way of still providing a taxi service at the beginning of the war. Later people had to hand over the tires from their bicycles because the Germans could use the rubber.

These types of confiscations had the effect of making travel harder, so it made keeping control of the population easier for the occupiers.

Confiscations took place on all levels, leaving the population with no control over their posessions and property.

The home of my grandparents on my mother’s side was huge and had six bedrooms. The family consisted of my grandparents, a 5-year-old and a toddler at the beginning of the war. So they had plenty of room and the Germans assigned soldiers to be quartered with the family.

Food rationing. Life was coming to a standstill, and there were food shortages. Each family got food stamps according to the number of people and their ages. This also kept the population under control, because it was harder to hide Jews if you could only get food for your immediate family.

The following are comments that students wrote about this information.

“One thing  that really strikes me is that not only did the Germans occupy the Netherlands, sometimes they even occupied the homes of Dutch people! I cannot imagine having to share my house with soldiers who had invaded my country, killed many of my people, and essentially torn my life apart. The horrible thing about it is that then families wouldn’t even be able to talk amongst themselves without fear of a soldier overhearing them. They could never speak out against the war, because there was always the potential that the soldiers in their house would hear it and kill them! And I’m sure most of the soldiers weren’t particularly polite to the people they were staying with. That would be such a nightmare! I am just so glad that (hopefully) I’ll never have to experience that in my lifetime.”

“The biggest impression made on me in the presentation occurred when she discussed the confiscation of goods that happened to the people of her country. I have learned some about the holocaust in my years of schooling, but I had never heard about the stealing of items from people who were not Jews or being sent to concentration camps. This was a shock to me. It honestly saddened me to think of the people getting kicked out of their homes or having necessary items stolen for the German people. This was especially sad to me because I thought a lot about the children getting their bikes and other items taken away from them.  I imagine it must have been very hard to go through daily life knowing anything in your possession or even your home could be taken away from you at any minute.”

The next post in this series is about Dutch forced labor in the German weapons factories.

7 responses to “The Netherlands in WWII : The Occupation”