The Netherlands in WWII : The Jews

This is the third post about impressions of American high school students of a presentation I did on the Netherlands in World War Two. Click here for the introduction to said presentation.

The Jews were by far the worst affected by the war. First they had to sew a star of David on their clothing, so they could be identified in public as being Jewish. Then they were not allowed on public transport. Then they weren’t allowed to enter certain stores. Eventually they were restricted to one area of the city, and in 1941 the deportations to concentration camps in Germany and Poland began. In Amsterdam alone more than 100,000 Jews were deported and less than 900 survived.

Those who couldn’t go into hiding or believed everything was just temporary, were taken to roundup camps in the Netherlands, like camp Westerbork, and from there they would go to the concentration camps in Germany and Poland.

Although I feel that the holocaust is the most important thing to learn from and about when it comes to World War Two, I didn’t elaborate too much on it, because I assumed the students would be learning more about it later on. I just focused on some aspects of the persecution of Jews in the Netherlands. 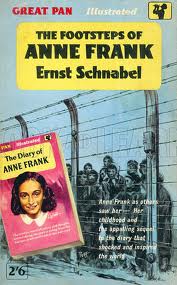 Most of them had heard of Anne Frank, a young Jewish girl who lives on in the diary she wrote while in hiding in Amsterdam. I also mentioned a book I read a long time ago, called The Footsteps of Anne Frank, by Ernst Schnabel. It follows Anne Frank via witness accounts to her death of typhoid fever in Bergen-Belsen concentration camp in April of 1945, months before it was liberated.

Everyone was excited to hear about this book, because they wanted to know what happened to Anne after she was taken by the Germans from her hideout.

Helping Jews was extremely dangerous, because if the Germans found out, you’d be interrogated (a.k.a. tortured) to find out who your contacts in the resistance were, and then you’d be put before the firing squad. 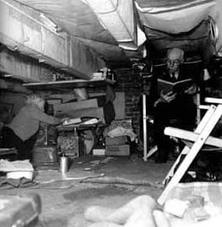 Jews hid in attics, like the couple on the right, in cellars, in crawl spaces, in barns, etc. Some Jewish children hid in plain sight on farms, and passed for cousins from the city whose parents wanted them out of harm’s way.

I also told the students a more personal story, of what happened to friends of ours. In 1965 our family emigrated to Australia. There, my parents befriended a middle-aged couple from Holland. I called them Uncle Ben and Aunt Gerda. To me, as a child, they were just this nice old couple, who had never been anything else but old.

My parents knew that Uncle Ben had hidden Jews during the war, and that that’s how he met Aunt Gerda, who was Jewish and had fled Germany into the Netherlands with her two children. That was about all they knew, because resistance fighters didn’t usually toot their own horn too much, and I imagine Aunt Gerda just wanted to forget.

Much later, when we were back in the Netherlands, my parents were on a day trip to the east of the country, and they visited a museum in a small town, and came across Uncle Ben’s name in a booklet about the town during WWII. It turned out that he ran an upscale hotel during the war, which was a popular stop for high level German SS and Gestapo officials on their way from Germany to The Hague and Amsterdam.

At the same time, however, Uncle Ben hid up to thirty Jews at a time in the cellar. To say that this would have required nerves of steel is no understatement.

This is where he met Aunt Gerda.

Her children were in hiding at a farm. It happened a lot that Jews in hiding were separated from their families, as it was easier for farmers to explain children, and it was harder to keep young children quiet in attics and cellars.

After the war Ben and Gerda married and moved as far away as they could get.

The following are some comments of students after my presentation.

“The thing I found most interesting in the presentation was the treatment of Jewish people, where they were restricted and then attacked.  I felt the same way in Pakistan when the fundamentalists became powerful, because my family was treated different than other people because of being musicians and Sufis.”

“The biggest thing is for me in this presentation that has made the biggest impression on me was  the persecution of Jews.  They were frightened of German soldiers and threatened by them.  I can relate to this thing so I can feel how it would have been.  When we were in Pakistan we were threatened by Taliban; we were not safe there.  I can feel how it would be like to live where people don’t want to live with you and you feel unprotected.”

“I thought that the fact that people hid the Jews was interesting because I wonder sometimes about how they actually could get away with that.”

Later: Here‘s a personal account by an 80-year-old man who was in hiding as a child in the Netherlands.

The next post in this series is about the German occupation measures.

9 responses to “The Netherlands in WWII : The Jews”