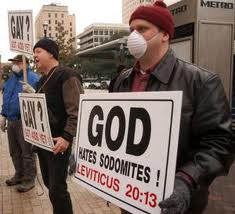 Okay America, here’s what I don’t get about the national gay marriage debate. (Apart from the fact that Obama could have said he was for it a few days earlier, to help the North Carolina LGTB community, that is.)

You’ve been here before.

Remember the Civil Rights Movement? Remember how adamant lots of white people were that segregation must stay, and that God was on their side? 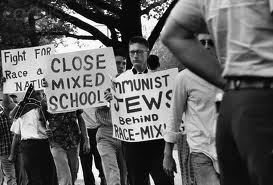 The struggle for gay marriage is the civil rights movement of our generation. It can’t be stopped, because it is about people fighting for equal rights.

Those who are so adamantly against it, thumping their bibles, will be shown on TV fifty years from now, just like we see clips of women with butterfly glasses holding signs that say things like “Desegregation Over My Dead Body” on TV every now and then. And their grandchildren  cringe.

So here’s what I really don’t get. African Americans, the two thirds of you who are against gay marriage. Thumping your bibles right alongside the same kind of people who, fifty years ago, would have denied you your equal rights! What’s up with that? You got your rights and now you’ve locked the door behind you, is that it?

How about some solidarity? How about looking at the bigger historical picture? How many people who argued for slavery pointed to bible passages to justify themselves?

I suppose I’m asking bible thumpers of all backgrounds to stop thumping their bibles and realize they’re always on the wrong side of history in these matters.

But what are the odds of that?