I did say of the previous book spine poem that it was the first installment, during this national poetry month. But as some of you may have noticed, I have a hard time following up on stuff. (I wasn’t always like that; I blame it on menopause.)  Book spine poetry also turns out to be harder than I thought.

Here’s my second attempt, again made from books in my own collection. It has absolutely nothing to do with being an immigrant. But it rhymes! Thank God I have a category called “Neither Here Nor There,” or else where would I be? 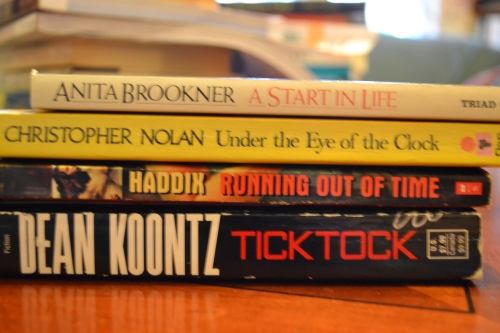 For my third attempt, I went to Barnes & Noble while my kids were having math tutoring.

I started grabbing a few books that had titles that seemed easy to combine with others, fully intending to put them all back as soon as I had a poem.

The problem was that I kept seeing titles that would probably go really well with a title I hadn’t found yet. But I realized that if I found that title at some point, I would never remember where the first title was in the store (my deteriorating memory can also be blamed on menopause), so I ended up picking up everything that I thought might be useful.

Before I knew it, I already had an armful of books. A shop attendant–either genuinely helpful or just worried I was planning to steal something (I can never tell here)–told me she could take them to the cash register for me while I continued shopping. I told her I wasn’t going to buy all of them (of course, I wasn’t going buy any of them), and that I would decide once I had “certain books” selected. I hoped it sounded like there was a system to my madness, which there really wasn’t. In any case, she put them on the information booth counter instead.

I continued grabbing books, thinking that any moment I’d find a title that would link perfectly with one of the books I had already pulled, but no. I ended up, with fifteen minutes to go before I’d have to get the kids, making a weird, twisted poem that again had absolutely nothing to do with being an immigrant.

I quickly took a photo of it… 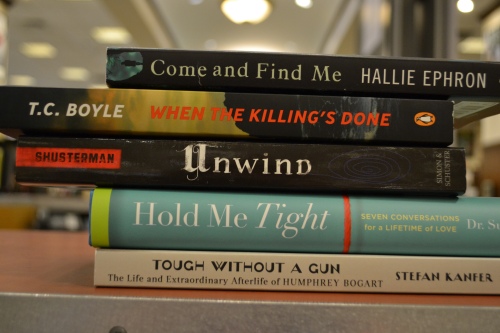 …and slunk out of the store, because there was no time to put the books back.

I will have to stay away from that particular Barnes & Noble for a while. And the poem sucks, but at least I’m keeping my promise.

I’ve learned a lesson: the poems on Brain Pickings probably weren’t made by randomly grabbing titles in a bookstore. So maybe I’ll try doing one by picking a random title and then searching for keywords on Amazon.com to make the rest of the poem. Then I would just have to write down the titles, grab only those off the shelves of Barnes & Noble, and take a picture.

I’m sure you all can’t wait to see it next year. (But that’s not a promise, don’t worry.)

Did any of you out there have any poetry adventures this month?