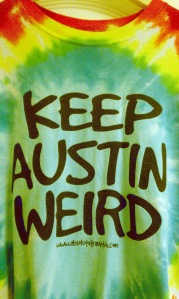 One of the many things I like about Austin is its quirkiness.

Austin is a small, liberal and pretty open-minded island in the rest of a very conservative state. And Austinites are proud of that. We drive around in cars with bumper stickers that say “Keep Austin Weird” and we wear tie-dye T-shirts with the same slogan.

One of Austin’s icons, pushing the weirdness envelope hard, was Leslie. The very first night my husband and I went out after we moved here, we were walking around 6th street.

We saw a woman with killer legs, in a thong and a bra, high heels and a boa wrapped around her neck. She was letting herself be photographed by several people. We were coming up from behind, wondering what she was about, and it was pretty shocking to find out she was actually a he, beard and hairy chest and all. 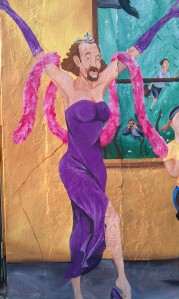 Here was this guy who dressed as a woman, but in no other way did he make an effort to look like a woman. (Except for his legs, which were shaved.) Seeing a bra across that hairy chest was so over the top, it was funny.

Austin is quite open-minded, but someone wasn’t, because a few years ago he did get beaten up and he had a bad head injury. Apparently he was never the same. I believe it was last year that he was in the hospital again for a night or two, and people held a vigil outside for him.

Today he died. I wonder if anyone will ever be quite as Austin-weird as Leslie. He was a hard act to follow.

Click here for the Austin American Statesman article about Leslie.

This entry was posted in Austin and tagged Austin, crossdressers, Leslie Cochran, people. Bookmark the permalink.