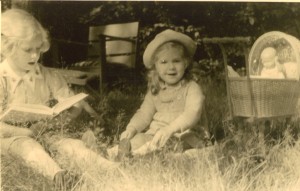 This is the first of a series of posts about my family during WWII. For a brief history of the Netherlands in WWII, click here.

Most of the stories about WWII come from my mother’s side of the family. My grandparents were in their 30s when the war started, my mother was five, and my aunt turned one on a beautiful day in May 1940. (The family celebrated her birthday outside, and saw the first German planes fly over on their way to bomb the blazes out of Rotterdam.) My uncle was born two years later, in the middle of the German occupation.

I’ve always been fascinated with the stories my grandmother on my mother’s side told about WWII. My mother, who was dismissive at best about anything my grandparents said or did, dismissed the stories as sensationalism, since her family never did anything heroic or suffered any hardship in comparison to many others during the war.

This is certainly true; my family sailed through completely unscathed, but I still think the stories are interesting because a lot of them show how every day something could easily turn into a disaster, even if in my family’s case it never actually did. It’s what could happen that made daily life so scary and uncertain for everyone, even under the mildest circumstances, and what illustrate just as well as the stories of horror and heroics what it meant to be occupied.

For instance, one day my grandparents were both cycling back home from getting food somewhere, and when they were not that far from home there was a checkpoint that hadn’t been there before. Checkpoints just showed up from day to day, and it may have been set up because they were looking for someone in particular or for subversive activity in general, or because they were confiscating bicycle tires. Who knows.

Either way, when the soldiers at the checkpoint gestured to my grandparents to stop and get down, they fully expected them to obey. But my grandmother, who had been eating sugar beets and who knows what else of late, felt that she would have the runs the moment she got down from her bike, and she didn’t intend to get down until she was home.

(When she first told me this story, I hadn’t had German lessons yet, and in Dutch “krank” sounds like it would be related to “krankzinnig”, which means insane. So when she told me that the soldiers just looked at her in astonishment and did nothing, I could see why, because she must have been a totally convincing lunatic, better to be left alone. It wasn’t until a few years later that I learned that “krank” means sick in German.)

In any case, she drove on, and my grandfather stopped and explained, and luckily nothing happened. So it was a funny story when she told it, but I later realized that it was the kind of situation that could just as easily have resulted in her being shot, depending on the reason for the checkpoint. And that my grandmother was taking quite a risk to maintain her dignity.

I’m sure some of you have much more impressive stories about encounters at German checkpoints on the street during the war. Write a comment.

2 responses to “The Runs”