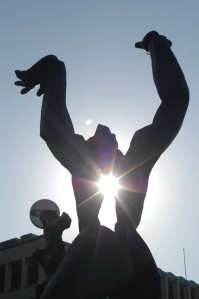 One thing every person my age grew up with in the Netherlands was war stories. Stories about World War II, that is. But before I share some of my family’s stories, let me first give some background info.

Germany attacked the Netherlands in the beginning of May, 1940, and a few days later we capitulated, because the Dutch army was pathetically outdated, having been neutral during World War I. Most soldiers moved around on bikes. The Germans bombed the hell out of Rotterdam and told the Dutch government that Utrecht would be next if they didn’t surrender. Realizing that further bloodshed was pointless, they surrendered, sort of—the Dutch government, along with Queen Wilhelmina, moved to England, where they coordinated and provided moral support for the resistance as best as possible via Radio Orange.

And the Germans moved in. They took over every level of government and gradually began to implement restrictive measures. Jews, of course, were the main target. And in 1942 the roundups of Jews and the deportations to the concentration camps in the east began.

The rest of the Dutch population could—extremely simplistically—be divided into three groups: resistance, collaborators, and people just trying to keep their heads down and survive.

The Germans had different ways of keeping the population under their thumb. One of them was the food stamp system. Thanks to the meticulous recordkeeping of local government, the Germans knew exactly who lived where and how many people were in each family. So people were only given food rations for the immediate family. It made it harder to hide Jews, because that involved somehow getting more food or food stamps.

Resistance could be anything from distributing illegal pamphlets and newspapers to raiding food stamp offices to help Jews in hiding, to spying, sabotage, and helping downed RAF pilots get back to England. Some government employees stayed at their posts, but secretly did what they could to foil the Germans by destroying municipal records and such.

There was a national socialist party in the Netherlands before the war. Not as popular as in Germany, but popular enough to provide plenty of collaborators who were tickled pink to have the Germans occupy the country. They actively did what they could to help the Germans, such as finding out who was hiding Jews, who was in the resistance, etc.

Since most German men and later even boys were fighting at the two fronts, men were needed to work in the German war factories. They got those men from the countries they occupied. Every now and then there were roundups of every man in a certain age group (the age range getting bigger as the war wore on), and these men were taken by train to the factories in Germany, where they basically performed slave labor, and of course they were in constant danger because the factories were prime targets for RAF bombing raids.

Since the food stamp rations were minimal, especially during the last year of the war, people had to try and supplement their supplies any way they could. People from the cities would take whatever valuables they had to the country and barter them for a few potatoes, or half a pound of butter, and toward the end even sugar beets and tulip bulbs. Getting out of town and into the agricultural areas was made more difficult because all motorized vehicles had been confiscated at the beginning of the war, and eventually most rubber bicycle tires had also been taken to use as material for weaponry and army supplies.

Most Americans have seen the movie A Bridge Too Far, about the move from Omaha Beach on D-day to Berlin, which was supposed to happen in one big push. But in the winter of 1944 it stagnated because the supplies and backup personnel had to catch up. One place where the Americans were stuck was at the Rhine in the Netherlands. The bridge that was too far was in Arnhem.

So that winter the southern half of the country was liberated while the northern half was suffering one of the most severe winters on record while at the same time being pretty much cut off from food and fuel distribution. The winter of 1944-45 is known as the Hunger Winter, and because meticulous recordkeeping continued, the starvation statistics are being used to this day in nutrition and famine research.

Almost 200,000 Dutch people died. Less than 8,000 were soldiers. The rest were civilians. More than half of the civilians were Jews, most of them from Amsterdam. Amsterdam had had a flourishing Jewish community before the war. After the war only a few thousand returned, often to find that their houses and belongings had been taken. Many survivors emigrated to the Unites States, Canada and Australia.

My father and mother were four and five respectively when the war started, and nine and ten when it ended. My grandparents were in their thirties and early forties during the war, with three children on each side. In following posts I will relate some of the anecdotes I have been told by my family about the war.

The information above is meant as only a very general overview so you can put the stories into some context.