Watch Out For Inflation

Notes From a University Student 11 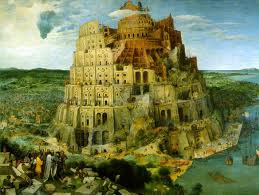 Pieter Breugel The Tower of Babel

Not everything related to education here can be easily translated into Dutch. To American standards I’m studying at a university, but to Dutch standards that’s a rather big word.

Americans would compare my four-year bachelor’s degree to a four-year degree at a Dutch university, which it’s obviously not.

On average–at the small state university I attended here anyway–it’s comparable to Dutch ninth grade (derde klas middelbare school), with a few courses (vakken) that are maybe comparable to a beginner’s college course, but also some where both the content and the way the students are treated are closer to Dutch fourth grade (vierde klas lagere school)

If you think I’m exaggerating, read my other posts on being a university student here.

Also, often only about one year all together of a bachelor’s is spent on your major, because three quarters is spent on classes that should have been taught in middle and high school, like math and history and a second language, and this is rather inflationarily called Liberal Arts. (I may have made up a new word there.)

So compared to a Dutch four-year college degree in a certain field, which makes you a doctorandus, I have had at most a quarter of the courses (less actually, since a school year is shorter here), and that’s not even going into the difference in level.

When I explained this to my Dutch archaeology friends, they said that that explained why, when they were in their last year of their archaeology studies at their Dutch university, an American guest lecturer was talking to them as if they were fifteen-year-olds who knew nothing about the subject.

And now I’m doing graduate courses, to get a master’s degree. I have heard several European professors say that a four-year degree from a European university is comparable to something between an American master’s and PhD. So far I have to agree.

When I mention a course, I really mean a subject. But not really, because while a Dutch ‘subject’ is usually taught several years in a row, education here is comprised of different “courses” that all take a semester or five summer weeks, and they are mostly unrelated to each other.

It’s already like that in high school. So it’s impossible to increase the level of the courses throughout the years, because they can mostly be done in any order. Therefore the professor can’t assume any collective knowledge or make any connections.

And when I talk about a semester, which means half a year, I really mean just over a quarter, because a semester is  only fifteen weeks. That is why, in Holland, by the time kids have finished twelfth grade, they have had an American year’s worth of extra education, compared to kids here in America.

You get three credit hours for each course, regardless of your grade. But credit hours aren’t hours. They’re points. In order to get my master’s degree, I have to accumulate 36 hours/points, and the more you do at a time, the faster you have your degree.

This encourages a lot of students to take all the easiest courses, because then they can take more of them at a time and graduate sooner than when they take courses that actually require some work.

So when you have done a course in Holland, which can consist of several subjects, don’t ever call it a course here, because then it seems like almost nothing.

And Dutchies, now you know why in my letters home I never translate the American word “university” with “universiteit.” From where I stand, the two are like apples and raisins. Well, aren’t you glad we got that all straightened out?

Writing and learning in college–my next post in this series.

One response to “Watch Out For Inflation”