Notes From a University Student 9 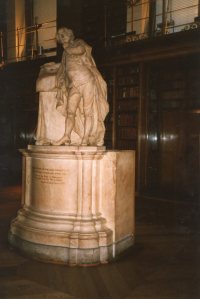 I started taking two courses for a master’s degree in English last month, but I’ve already dropped the Bible as Literature class.

First of all it turned out that my baby boy will only let me do one course a semester, and second of all it was boring as all get-out. Not at any higher level than the average undergrad class that I took. More infantile tests, and everything we had to read at home was discussed again in class.

It wasn’t even about the Bible as literature. The incredibly boring professor just told us the stories. Sunday school, and not at a much higher level, either. At least I read the Bible beforehand, so it was good for something.

The Shakespeare course, on the other hand, is fantastic. Finally a course at a level that you can expect at a university, I think. We read thirteen plays at home in thirteen weeks, and write four short essays each time on different aspects of the play, so that we have thought in detail about it by the time we discuss it. And we do discuss it! We don’t sit in rows, listening to the professor tell us what we have already read. We sit in a circle and discuss our findings. So it can be done, but for some reason people apparently think it can’t be done until graduate school.

We are reading Shakespeare’s comedies in chronological order, and we follow the development of his comic techniques. Finally a class with some depth to it. I’m learning a lot. Love it!

And what does the depth of a professor’s learning mean exactly? Read the next post in this series to find out.